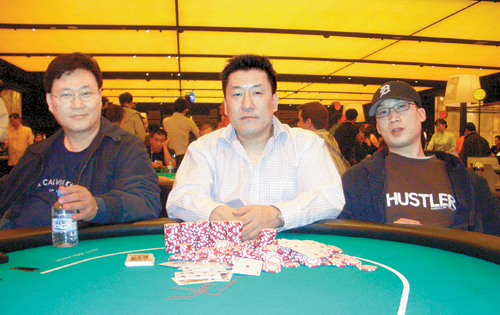 From left to right: Cha Min-su (known as Jimmy Cha), the real person behind the TV show “All In,” Mike Kim and Dan Park. Mr. Kim and Mr. Park founded the Korean Professional Poker Tour. By Richard Scott-Ashe

As the free-roll Texas hold ’em tournament held Wednesday nights at the Walkerhill Casino kicks off, no one is talking. A few players are wearing headphones; the primped croupiers maintain a stern aloofness. The motley amalgam of players includes Japanese students, American soldiers, Canadian and British English teachers, Chinese businessmen and me, all presenting our best poker faces and seeming intently interested in the green felt directly in front of our chips. Behind us, rows of flashing slot machines twinkle and clang, and a throng of Chinese tourists mobs the Tai-Sai dice tables, shouting and waving as if they are in a fish market. The dealer deals.
In the 21st century, Texas hold ’em has swept the world, becoming the most popular form of poker online and in most U.S. casinos. It is the game of choice at countless underground tables around the globe. Spurred on by the invention of online gaming, televised tournaments and appearances in films such as 1998’s “Rounders” and the latest James Bond movie, “Casino Royale,” hold ’em has reached a peak of popularity in North America and is rapidly gaining ground in Europe. The Asian market is still in its infancy, but is growing up fast.
Dan Park is on the cutting edge of the Asian trend. Along with pro-player Mike Kim, he is co-founder of the Korean Professional Poker Tour, which runs the poker tables at the Walkerhill Casino. It is the first legal poker room in Korea, and the second in Asia. It grew out of Mr. Park’s beginnings in the underground Texas hold ’em scene in Seoul, a scene he claims to have started. The two partners are in the process of trying to legitimize poker on the peninsula. It is no small task, considering the almost complete ban on gambling for native Koreans (the only exception being at Kangwon Land Casino, over two hours from Seoul).
Born in Toronto, Canada in 1974 to Korean parents, Mr. Park came to visit Korea after the 2002 World Cup. Having graduated from the University of Toronto, he was experiencing a typical post-education malaise. “I was trying to find myself,” he said, grinning shyly.
Finding little fulfillment in his work as a headhunter for English academies, he let off steam in an underground poker game played by a small group of locals on weekends in a Gangnam bar called Bugsy’s.
“Ask anyone,” he said. “Everyone knows Bugsy’s.”
They played seven-card stud, a game that has been eclipsed in most of the world by the Texas hold ’em rage. Mr. Park, having played hold ’em in Canada, taught the game to his poker group. “For a fee, of course,” he said, adjusting his baseball hat.
The group was instantly hooked.
*
I lose my first few blinds as the players feel each other out. The professionals and amateurs emerge. Some English teachers bet out of turn; the hands of the Japanese student sitting next to me shake as he pushes his chips forward in a tidy pile. The Chinese businessmen keep their mouths turned down at the edges and their eyes partially closed, tossing their chips into the pot as if nothing could be more boring.
In Texas hold ’em, each player gets dealt two cards. There is a round of betting based on the potential players believe their cards to have, or the potential they would like other players to believe their cards have. Then three communal cards are flipped over in the center of the table (the “flop”), followed by another round of betting. Two more shared cards are then dealt, with a round of betting before each new card is turned. The two players to the left of the dealer are the small and big blinds, meaning that they are each obligated to bet so that there is always some action on the table. When it is your turn, you may meet the current bet (called “checking” if you have already put in the correct amount), raise, or fold your cards, losing the money you have already put in the pot. 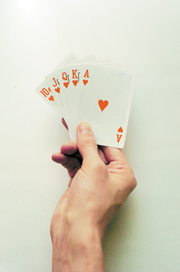 I luck out, winning big with king/three. Both of my cards hit on the flop, giving me a double pair. My heart pounds in my chest. I try to keep my face cool as I pull the stack of chips I’ve won towards me.
I realize all the Chinese businessmen are bluffing, and start to match their brazen bets. Soon I have the biggest stack at the table, and the other players drop off one by one.

*
“As weeks went by, members at Bugsy’s grew,” said Mr. Park. “The weekend games turned into weeks too.
“The internet played a crucial role. I posted a poker club cafe on Daum, and people from the outskirts of Seoul started trickling in.”
From there, the night branched out from Bugsy’s and other clubs started up. At the peak, Mr. Park estimates there were over 100 underground clubs spread throughout the country.
Mr. Park lived off of the underground games for a year, claiming he won 90 percent of the time. The tournaments became larger and more expensive, sometimes requiring a buy-in of up to $10,000. With that kind of money kicking around, the scene soon garnered attention from dark corners of Korean society. Geondal, Korean gangsters, opened up their own poker nights and pressured the games outside of their control to fold.
The independent clubs quickly came under the control of the geondal. Because of his incredibly high win percentage, Mr. Park became increasingly unpopular, getting banned from some Gangnam games. One night, he had won a few thousand dollars and began to feel uncomfortable under the eyes of some of the more questionable characters in the club. He got up and went to cash out his chips.
“One of the local gangsters said, ‘No, you can’t go,’” said Mr. Park. “I sat back down, dumped my chips and left... All I can say is I survived.”
Sometimes police would come into the clubs looking for a piece of the action.
“You pay them off, they go away,” said Mr. Park.
Suddenly, illegal gambling came under the intense scrutiny of the government. The breaking last year of the Sea Story scandal ― where gift certificates were illegally exchanged for cash in a multi-trillion-won-per-year gambling industry ― sparked a government crackdown. It was the final straw for the underground poker scene.
“The whole scene died, and as it did, so did my pocket money,” said Mr. Park.
*
I have been winning. I’m at the final table, settled behind a formidable stack of red $500 chips, the biggest one at the table. The five other players are looking at me with what I take to be awe and respect, but is more likely suspicion and malice. I peek at the cards the dealer has flicked in front of me. As I do, the American soldier across the table pushes all his chips into the center.
“All in,” he says. My cards are both kings. Sweat drips down my ribs as I push all my chips in to match.
“All in,” I say. We flip our cards. He has ace/queen. My chances of winning are huge. The adrenaline courses through my body as I contemplate the 500,000 won reserved for the winner.
The dealer flips the flop, and there is the ace. Luck has turned against me. The two last cards aren’t kings, meaning my pair is meaningless. I’m out.
*
Along with Mike Kim, whom he had met at some of the games, Mr. Park formed the Korean Professional Poker Tour, officially turning his back on the game’s underworld and vowing to validate Texas hold ’em in Korea. Apart from the Wednesday free-roll, for which there is no entry fee, they now hold a Sunday 20,000 won buy-in game and a 100,000 won buy-in tournament on Saturdays. The eventual winner of the Saturday qualifiers will be sponsored in the World Series of Poker in Las Vegas in July. From Aug. 16 to 19, they will hold the Korea Open, the first major poker event on the peninsula, inviting big names like Doyle Brunson, Ted Forrest and Billy Baxter. There are also plans in the works to have a celebrity event in the same month with such stars as Leonardo DiCaprio and Matt Damon. Cha Min-su, the real person behind the hit TV series “All In” with Lee Byung-heon, can frequently be seen at the tournaments. As far as incorporating local Koreans into the games, the Korean Professional Poker Tour intends to hold cash-free events with the prize being sponsorships to international games.
“We want to show Korea that poker isn’t a gambling game; it’s a skilled sport,” said Mr. Park. “There’s nowhere in the world where you’re going to meet as many different kinds of people from different walks of life. Poker knows no religion, no color.”