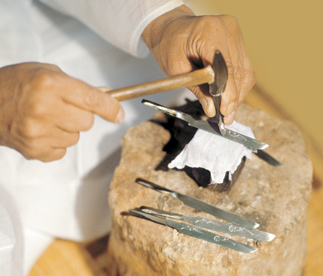 Where the Swiss had traditional red pocket knives, Koreans from the Joseon dynasty had eunjangdo, a silver knife, which developed into another form of norigae.
They are about 10 centimeters (four inches) long, covered in a fancy silver sheath. Records say both men and women carried them as a means of self-defense, although, towards the end of the dynasty they were used more frequently as a fashion statement for the upper class. Men fastened them on their waists, while women used them as large pendants with hand-made trinketry.
But due to its delicate features and small size, the eunjangdo was considered to be a female accessory. Eventually it became a symbol of chastity for unmarried women while married women carried it as a symbol of fidelity. Eunjangdo were kept underneath the hanbok top to be drawn if a woman felt that her life was threatened. They became a necessary accessory for all refined ladies to carry, along with a comb and a mirror.
Some folklore experts say eunjangdo were not designed for self-defense. They say a woman would use her eunjangdo to stab herself rather than submit to an attacker.
“While ordinary knives are usually used to hurt another person, the tip of eunjangdo always pointed toward the woman who carried it,” Jeong Jeong-heon, a professor at Changwon College said. 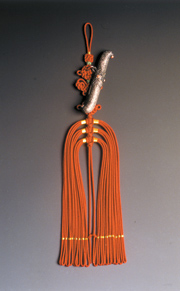 The knife was usually inscribed with the Chinese characters “Il Pyeon Dan Sim” which means “I am devoted to a single person for my whole life.”
The tradition of cherishing fidelity is part of Confucian custom, but historians say a series of wars, such as the Japanese invasion of Korea in 1592 and the Chinese invasion in 1636, made it necessary for women to carry the knife at all times.
Eunjangdo were introduced by the Mongolians during the late Goryeo Dynasty in the 14th century. The beautiful designs made them popular ornaments and mothers would passed them onto their daughters and daughters-in-laws.

There was another usage for eunjangdo. It was used as a portable tester by the nobility, to dip into soup served by strangers. If the food was poisoned the knife’s silver would be tarnished. Apparently the rich felt threatened at all times.