Pendant beauty is a many-tasselled thing

Pendant beauty is a many-tasselled thing 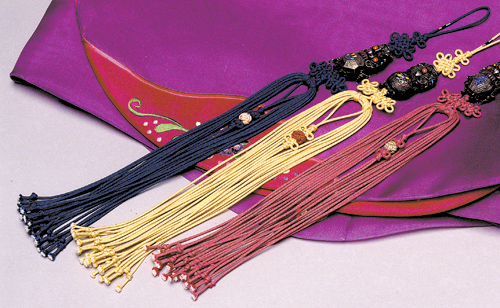 12th in the series | Korean Pendants 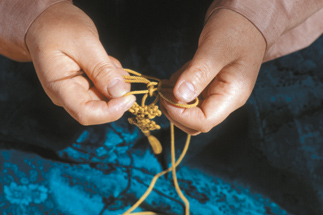 a craftsman making knots for a norigae tassel

At a recent wedding I saw a dresser’s hands shake as she put down a set of gem stones and silk strings she had received from the bride. She rolled them up carefully in white tissue paper and then wrapped the package again with a silk cloth.
“These cost at least 30 million won [$32,000],” whispered the middle-age woman as she finished helping the new bride out of the traditional hanbok she had worn for the wedding ritual. “Her mother-in-law handed them down to her new daughter-in-law.”
“As you know, not many mother-in-laws do that these days,” she said with a smile.
Because my friend got married to a man from a family that appreciates traditional beauty and values, I got to take a close look at a very nice norigae, a pendant attached to silk strings that is worn at the high waist of a hanbok skirt. 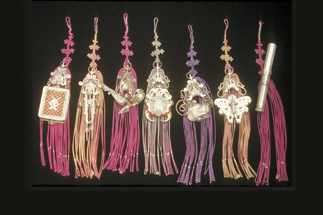 The norigae that my friend wore was a set of three pendants, each carved out of amber in the shape of a terrapin, a pumpkin and a coral, symbols of blessings and prosperity. They were attached to a long tassel of soft silk strings in colors of red, yellow and dark blue, the three colors typically used for norigae strings. Three tassels were tied in a knot at the top and hung loosely from the waist of the skirt, giving the simple dress a delightful accent.
In fact, the type that my friend wore was one of the fanciest available, according to Jung Da-woa at Han Ji Hee Classic, a shop which supplies designer hanboks and the ornaments that go with them.
“In the old days, brides always wore norigae with three tassels and three ornaments, but this custom has pretty much faded away,” Ms. Jung said explaining that three tassels were considered the most lavish choice and were therefore appropriate for weddings. “But brides these days do not seem to worry about the symbolism of norigae. They go for designs with a single tassel if their dress is glamorous, or three tassels if their dress is simple.”
“I think younger brides look very nice with a single tassel. They are lighter, cuter and easier to handle,” she said.
Uri Sallim is an Internet shopping mall for norigae and other traditional ornaments. The company’s spokesman said pendants with simple tassels were the most popular.
“We have norigae from a few thousand won to pieces that cost a million won,”she said. “The most popular are small ones that cost around thirty or forty thousand won. The ones with butterfly shapes are most popular.”
Norigae either has one tassel (danjak norigae), or three tassels (samjak norigae). The popularity of the three tassel version grew from the fact that northeast Asian countries regard the number three as lucky. Like many ancient structures that have three stories and legendary birds that have three claws, norigae also have three tassels.
When Korea had a monarchy, all the noble ladies who were invited to palace parties for events like the Chuseok holiday luncheon or birthday dinners wore norigae with three tassels. When the queen went to visit the king’s mother, she also wore her best three-tasselled norigae. 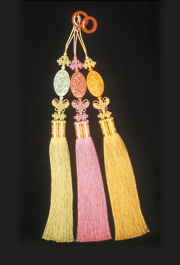 Norigae developed during the latter half of the Goryeo Dynasty, in the 14th century. Although records say similar ornaments called yopae were found on women’s attire during the Three Kingdoms era, it was not until the Joseon Dynasty in the 15th century that these pendants earned their true significance.
Norigae became popular among women as the hanbok jacket became shorter and the waist of the skirt higher. Women needed another type of accessory to give the simple dress more color and decoration. But norigae also filled a gap caused by the lack of other accessories such as earrings, bracelets and necklaces. While women in earlier times enjoyed jewelry made from gold or silver, women during the Joseon Dynasty considered shiny metal pieces to be unrefined, these being days of abstinence and self-denial according to the Confucian tradition. They chose to express beauty through elegance instead.
As norigae developed they could be used to find out a great deal about a woman’s family background depending on the material, the color and the designs of the knots. Even given the dominance of Confucian values, the best pieces were made from gold or silver. Other materials that were widely used include jade, amber and pearls.
Sancheonju norigae was reserved for the queen. According to Buddhist belief it symbolized the endless universe with three gigantic pearls.
Smaller samjak norigae or a danjak norigae were for younger girls. A lot of them were made with pink, yellow and light green knots. Some had bells, while other popular ornaments were ducks, peppers or vases.

Women from peasant families also had norigae. They were usually made of silver and reserved for special occasions. The women wore them at weddings and afterwards wrapped them up in tissue paper and silk cloths. They were kept in a closet and taken out only when they attended another wedding.
Sometimes there was a small silk pouch attached to the strings. It was usually the danjak norigae that had the pouch attached. Some carried scented powder to use as perfume, while some carried needles and strings needed for sewing.
Women wore norigae for superstitious reasons as well.
According to Kim Eun-suk at the Research Center of Korean Knots, norigae was one of the mediums women used to wish for sons or long life.
They inscribed Chinese characters such as “Bu Gwi Da Nam,” on the norigae meaning they wished for riches and many sons, or “Bul No Jang Saeng,” meaning one hopes for eternal life.
“In winter women enjoyed wearing norigae with amber pendants, while pendants with white gems were worn during the summer,” said Ms. Kim.