Shinzo Abe could learn plenty from a frog

Shinzo Abe could learn plenty from a frog 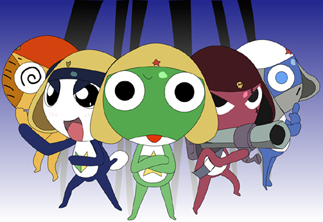 A scene from “Sergeant Keroro,” a Japanese animation with a message. [Tooniverse]

The late Kim Soon-duk was 82 years old when I interviewed her in 2003 to hear her stories of being a sex slave to the Japanese army during World War II. During the interview at the “comfort women” shelter, House of Sharing in Gwangju, Gyeonggi province, she often flinched at the sound of doors sliding, a habit acquired after years spent in a small cell where she had to “entertain” Japanese soldiers. She wrapped up her hours-long story by saying that she would not be able to sleep that night because of the overwhelming memories.
Seeing her bitter smile, I could do nothing but shed tears.
Ms. Kim died months later in 2004. Her last wish was to reconcile with her former enemies, but she had to hear stories from Japanese politicians that denied her past. Every time I hear or write stories about comfort women, I am reminded of her bitter smile. If she were alive, she would have flared up against recent remarks by Japanese Prime Minister Shinzo Abe, who said there is “no evidence in the strict sense” that comfort women were forced into sexual enslavement.
In the case of Ms. Kim, she boarded a ship to Nagasaki, Japan, when she turned 16 in 1937 at the height of Japanese colonial rule here, hoping to work in a factory. But she turned out to be headed for a life of sexual slavery.
Please don’t think I’m a blind patriot, but I find it hard to swallow Mr. Abe’s comments when I know they will hurt surviving former comfort women. This issue goes deeper than being Korean ― it’s about being human. Ironically, a major source of happiness in my life comes from Japanese books, movies and music.
Japan’s prime minister could learn plenty from the Japanese animation, “Sergeant Keroro,” which I am so into these days. It airs on the animation cable channel, Tooniverse, at 4:30 p.m. on weekdays. It’s a story of a group of frogs flying from Planet Keron to invade Earth. Led by Sergeant Keroro, a company of frogs finds its way to Earth, but things do not work out when they are cut off from their headquarters.
Each frog soldier ends up infiltrating a civilian’s house and making friends with the Earthlings. Sergeant Keroro, for example, shows great talent in house chores, especially cleaning, and Private Tamama becomes the friend of a wealthy girl. Other frog characters include Giroro, who takes great pride in being a soldier and Kururu who has an obsession for invention.
I adore the Tamama character in particular, a frog that looks and acts so naively but turns into a monstrous figure when steamed up. It appears to me that the directors of this animation presented both sides of the human psyche ― the inner and outer mindsets. They say that the Japanese in particular have honne (inner mindset) and datemae (outer mindset).
One specific episode popped into my mind after mulling over the recent situation sparked by Mr. Abe. Tamama becomes the head of his company. Dressed up in an imperialist outfit, he turns into his monstrous self, and starts to ostracize his fellows.
However, Tamama realizes that he should live in peace with others, and apologizes to his fellows.
Well, is it too much to expect Japan to be like Tamama?
So I’m torn between the political side and the cultural side of Japan, but my wish, and the late Ms. Kim’s wish, is simple ― to live in a world where everyone can reconcile over the past, live in a happy present and pursue a bright future.
At least she would be able to find some relief in the fact that the shelter, the House of Sharing, has a large number of Japanese visitors and receives significant donations from Japanese.
It is time to find Ms. Kim’s grave and pray she finds some comfort in her afterlife.