[Talk of the town]SOLID TO MAKE A COMEBACK, and more

[Talk of the town]SOLID TO MAKE A COMEBACK, and more 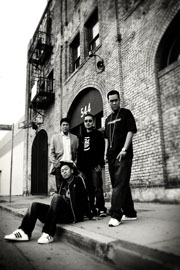 Ten years after the rhythm and blues group Solid disbanded, two of its former members, Lee Jun and Jung Jae-yoon, are making a comeback with a new name ― Soul Town. Kim Jo-han, the group’s former lead vocalist, will not participate in the comeback because he has changed management agencies.
Lee and Jung will be joined by Steve Kim and Jung Yeon-joon, two members of the hip-hop group Uptown. The four are planning to release an album by the end of this month.
The Uptown members are in the United States at the moment and scheduled to fly back to Seoul by next week. As for Lee and Jung, it will not be until their album is released that they will make an official entry back into the Korean pop industry.
There have been plenty of rumors in the past about Solid making a comeback. But Kim announced plans to go solo, and the three musicians never got together after they disbanded in 1997 as “Korea’s rhythm and blues pioneers.”
Lee and Jung have been completely absent from the celebrity scene. Lee got married two years ago and has been working in the home interior business in the United States, while Jung worked as a music producer in Taiwan and Hong Kong. 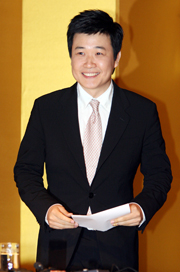 NEWS/SPORTS ANNOUNCER DECIDES TO GO SOLO
Popular television announcer and sportscaster Kim Sung-joo has decided to leave MBC, the country’s biggest commercial broadcaster, to go freelance.
“I have signed a five-year contract with Fantom Entertainment,” Kim said at a press conference at the Seoul Plaza Hotel earlier last week.
Kim, 34, gained celebrity status of sorts after a stint as an MBC sportscaster with soccer player Cha Doo-ri and his father Cha Bum-geun during last year’s World Cup games.
“I was an anchor and also a show host in entertainment programs and I gained popularity. But it was hard for me to constantly compete against the professional entertainment show hosts,” said Kim. “Then I realized that I was less like a news anchor as well.”
He said he felt becoming a sportscaster was the right choice and he chose Fantom Entertainment because it said it will support his ambitions.
“I still regret leaving MBC, but I quit because my new agency said it will help me do sports casting,” he explained.
Kim, however, denied rumors that he has received 1 billion won ($1.1 million) for the contract.