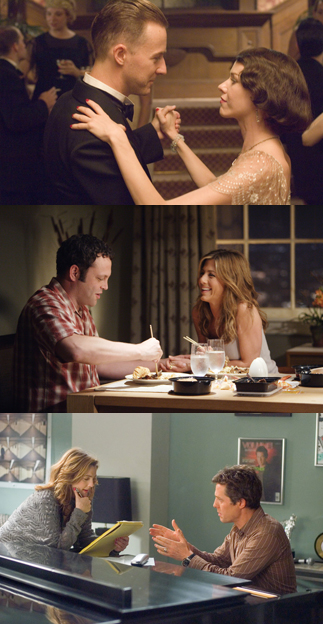 From top to bottom: Couples in love in “The Painted Veil,” “The Break Up” and “Music & Lyrics.” Provided by Warner Bros. Korea and UPI Korea

To love, or not to love: that might be the only question to ask this month.
With White Day (gulp) just a day away, love is in the air for those who have a special someone to receive candies from (or give to) on one of the most romantic days of the year.
White Day vanilla cakes and sparkling wines are on sale at most bakeries, White Day-perfect dresses are hot in shopping malls, and flower shops are ready to take special mass orders for White Day.
Theaters are no exception. Riding the bandwagon, local distributors are releasing plenty of romance flicks this month.
On top of that, distributors of “The Break Up,” which will be released officially in Korea next week, are offering a love therapy session for moviegoers.
According to the film’s marketers, dating couples need continuous counseling and self-help therapy in order to make a relationship safe and sound.
“A recent survey we conducted of young Korean men and women showed that 80 percent of the women do not actually mean it when they say they want to break up,” a marketer from UPI Korea said. “But 67 percent of men said they would not stop her if the woman says she wants to.”
“This proves that only about 33 percent of Korean men understand women,” she said.
One solution to this problem ― besides watching the movie about the battle between Brooke (Jennifer Aniston) and her ex-boyfriend Gary (Vince Vaughn) ― is for young couples to participate in the therapy sessions, which will take place tomorrow at the Broadway Theater at 9 p.m. in southern Seoul and Thursday at the Joongang Cinema at 8:30 p.m., in central Seoul.
“Problems don’t always repeat themselves, but if you look at a relationship problem closely, there are special patterns to what people say that provoke misunderstandings,” said Kim Jin-woo, a “date planner,” who will be leading the therapy session.
Mr. Kim is the head of Date Coach, a Web site and a company that gives personal advice on relationship troubles. He said most problems sprout from simple disagreements, such as where to go and what to eat on dates.
“It’s the smallest habits and behaviors your loved ones have that can irritate you, or can result in a break up,” he said.
During the therapy session, he will field questions from the audience. Some audience members have a wedding coming up. They were selected from those who signed up with the film’s distributor online.
The first session will be about understanding what habits your partner has, while the second session will talk about what you should be extra careful of when approaching a new relationship.
The date crowd is also lining up to see the Warner Bros. romantic comedy “Music & Lyrics,” starring Drew Barrymore and Hugh Grant.
Since it opened two weeks ago, over 70,000 people have seen the movie as of yesterday in Seoul alone.
The movie’s original soundtrack is also selling well. “Way Back into Love,” a song Barrymore and Grant sing together, is currently a No. 1 seller as background music in the foreign original soundtrack category at Cyworld.com., a blog site.
“Music & Lyrics is at the top of the Seoul box office at the moment,” said a marketer from Warner Bros. Korea. “We expect the number of audience members to grow as it is the only movie to have been released before White Day.”
The theater romance will be soon followed by director John Curran’s 2006 romance, “The Painted Veil,” scheduled to open here on Thursday.
It is the third film adaptation of Somerset Maughm’s 1925 novel, starring Naomi Watts as an English socialite and Edward Norton as a mild-mannered bacteriologist.
It is an international production with a beautiful Chinese landscape as the stunning backdrop.