A breakthrough in a murder case can come from a tiny piece of evidence. It can be a miniscule blood stain or a fingerprint on a discarded bottle, but solid evidence is hard to come by. To find the vital piece may require the search of a thousand homes and several weeks of sleepless nights. But without decisive evidence a case can remain unsolved indefinitely, depriving the victim’s relatives and loved ones of justice.
On Jan. 24, the nation was shocked when a woman’s torso and handless arms were found. They were in a bloodstained bag dumped in a restroom at the Ansan subway station. Some wondered if a serial killer was on the loose. 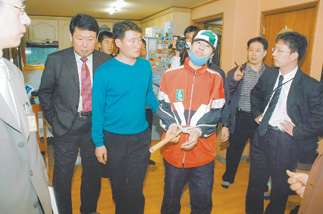 Danwon police launched an intensive murder investigation, according to three officers interviewed for this story. Blood stains from the victim were discovered in the bathroom of a house in Wongok-dong, Ansan. This turned out to be the site where the victim was mutilated. The discovery of the blood stains was the turning point in the case, but finding them was not easy. Over 50 police officers had to search night and day through countless homes in the area near where the bloody bag was found. During the day, the houses were often empty and officers had to wait for the occupants to return. But with the blood stains in their possession, the police were able to identify the victim as Ms. Jeong. No matter how hard someone tries to clean up blood, there are always faint stains,” said Mun Gyoung-yeon, 52, a lieutenant with the criminal investigation team at Danwon police station in Ansan. “One must look very hard and be tenacious. Without such persistence, it would be easy to miss the evidence.”

On the rooftop of the house where she was killed the police found other remains of the victim. Her legs had been left to rot in a plastic bag, which the suspect had bought from a nearby store.
The house also gave up a damaged mobile phone that belonged to the victim. The records from the phone gave police the identity of a suspect who was tracked down via his mobile phone.
The case was closed in seven days, but other cases can take much longer to solve. To find the crucial piece of evidence can sometimes take months, even years. Beginning in 2004, 13 people were killed and 20 others suffered severe injuries in different areas of southwestern Seoul before the notorious serial killer Jeong Nam-gyu, 36, was arrested in April 2006. Lack of conclusive evidence left the cases unsolved while Jeong’s killing spree continued. The chief officer at a district police station in the area was sacked for failing to stop the carnage, and some police officers were not convinced that the cases were connected until Jeong was caught. As with many serial killer cases, the arrest of a man on an unrelated offense can unravel a series of unsolved cases. Jeong was initially apprehended for burglary, but a police officer’s gut instincts led to much more.
“When I saw the tip of the pipe wrench [possessed by the suspect at the time of his arrest], I knew it wasn’t the first time he had committed a robbery,” said Yang Jae-ho, 54, the chief of criminal investigations at the Seocho police station. “The pipe wrench was rusted and seemed to have blood stains. I have an intuition about these things from long years of experience.”
Though Jeong denied his involvement in 23 other crimes, the police and prosecutors proved he was guilty by collecting evidence that made the case against him irrefutable. The police found knives and a tire iron in his house in Bupyeong as well as gloves he wore at the time of the murders. He wore gloves to ensure his fingerprints would not be left behind, but the police matched the honeycomb pattern of the gloves with prints from doorknobs at the sites of several different murder cases. The police checked footprints and found a match with those left at several crime scenes. They also found several transportation cards he used to commute between his home and the scenes of the murders. Using the cards, the police scrutinized Jeong’s whereabouts at the times the killings took place and found a match.
The police were able to compare the tools he used in the murders to three-dimensional pictures they had taken of the wounds suffered by the victims. “When a knife is stabbed into someone’s body, the dull edge of the knife often leaves a unique bruise in the flesh,” Mr. Yang said. The serial killer once stabbed his victim so hard that the tip of the knife was bent. As police subsequently discovered, Jeong had ground down the bent part of the blade.
Mr. Yang laments that the biggest difficulty associated with the investigation of serial killings is the increased skill of the psychopath. As the killing continues, his tactics become meaner, cleverer, bolder and more efficient. The killer tends to leave less evidence in later stages of the murders.

“That’s why serial murderers have to be captured at the beginning of their crimes. Otherwise, it is extremely difficult to catch them,” Mr. Yang said.
Jeong collected newspaper articles about sexual offenses and his own crimes and read books about health and forensic medicine, as well as “The Silence of the Lambs,” Thomas Harris’ classic novel about the serial killer Hannibal Lecter.
“He studied a lot. He wanted to make his crimes perfect,” Mr. Yang said. Jeong ran three times a week to increase his fitness and speed. He wanted to be able to flee from his crime scenes as fast as possible. By the time he was captured he could actually run 10 kilometers (6.2 miles) in 37 minutes, which is considered very good, even for professional marathoners.
He also changed his weapons from one crime to another and began to wear different shoes for each attack. He later tore the soles off his sneakers so he would not leave any footprints.
Serial killers often set fire to crime scenes or mutilate their victims’ bodies to eliminate evidence. Dismembering makes it more difficult to identify the victim, complicating any investigation. In the Ansan murder case, the suspect used a Chinese butcher knife to dismember the victim. Jeong set fires at many of his crime scenes and fastened the door lock from the outside to keep his victims locked inside. Yu Yeong-cheol, a serial murderer who killed 21 women and was arrested in July 2004, also mutilated his victims’ bodies.
“You only need a box cutter and a saw to dismember a body,” Mr. Yang said. He observed that male perpetrators were more likely to dismember their female victims, and this often occurs because of jealousy.
Serial murderers often kill their victims just to eliminate evidence. In a serial murder case involving eight murders and 18 robberies in Cheonan, two years ago, the perpetrators killed victims they had kidnapped for ransom. “They cut the wires they used to tie the victims and took the wires away with them. In the end, they killed the victims because they had seen their faces,” said Kim Tae-ryong, 33, a criminal investigator with the Cheonan police. Mr. Kim was able to obtain fingerprints belonging to one of the killers, Kim Jong-il, from a soju bottle in a restaurant where he had told the family of a kidnapped businessman to leave a ransom. The kidnapper used to dine at the restaurant.
The kidnappers followed foreign-made cars for weeks until they found a suitable target, mostly rich entrepreneurs. “There was never a case in which they chose a victim without careful consideration,” Mr. Kim said.
When serial crimes occur, a special project team is formed by the police. The crime investigators work around the clock. Their routine becomes brutal. They sit and sleep in a chair in the police station or in their car at a stakeout. Eating fast food and fighting boredom become routine. They cannot go home for weeks or even months.
“I was away from home for two months looking for the perpetrators,” said Mr. Kim, who solved the Cheonan case. “Waiting for the kidnappers to appear, I ate and slept in the same car for four days.” 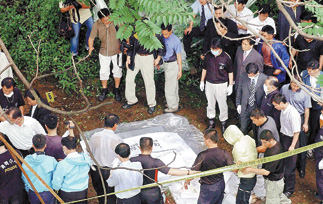 One of the two kidnappers had a prior criminal record, and, with the fingerprints from the soju bottle, the police identified the serial killer and tracked him down after three weeks of searching. It took two months to find the other kidnapper. He was hiding in houses that belonged to his relatives in an urban area of Ansan, Mr. Kim said.
“We can’t have a normal life,” said Mr. Kim, who is married with one son. Asked whether his wife minds him being absent from home all the time, he said, “My wife understands.”
Homicide investigators receive around 300,000 won ($320) more per month than other senior police officers to cover the extra expenses of their investigations. The amount is not enough.
“I get a few tens of thousands won more than others but I spend a lot more,” Mr. Kim said.
Despite working around the clock and dealing with hundreds of corpses, criminal investigators say working on crime scenes is an incomparable experience, and they feel like they are creating something from nothing. Most of all, working on crime scenes tends to fit their personalities.
“Solving a case that has been unsolved for a long time is the most exhilarating experience,” said Mr. Mun, who closed the Ansan murder case.
“I start from scratch, but, in the end, I handcuff the criminal. The rapture I feel at that moment is something ordinary people could never understand,” Mr. Yang said.

Mr. Yang, 54, began his career almost 30 years ago. He said he has seen and touched more than 400 corpses including many that had decayed and were swarming with maggots. But after all these years of attending grisly murder scenes, he still finds them disturbing. Mr. Yang said it was not until the 1990s, when democracy took root in Korea, that criminal investigators were given the status they deserved.
“In the old days, criminal investigators weren’t promoted as fast. Those who cracked down on university students for demonstrating against the military government rose through the hierarchy,” Mr. Yang said. “I didn’t like chasing after political criminals and searching college dormitories.”
Following the serial murders of recent years, the police recognized the importance of making their investigations more scientific. These days, many district police stations have established a scientific investigation department and adopted methods such as profiling in which data on different crimes and criminals is collected and compared to new criminal cases.
With television and the media so interested in the techniques of criminal investigation, criminals have become more knowledgeable and commit cleverer crimes. “That makes our job more difficult,” said Mr Yang.