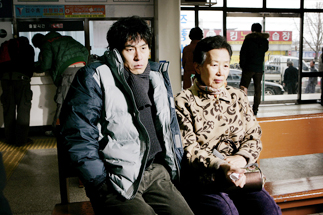 The film “Cruel Winter Blues” pays an uncomfortable tribute to immature male heroes from Korean gangster films by casting Jeom-sim (played by Na Mun-hee) in the role of a strong, self-sacrificing mother who has no choice but to endure her hardships.
Yet by the end of the film, it’s hard not to share a sense of sympathy with the sufferings and love exchanged between Jeom-sim and Jae-mun (Seol Gyeong-gu), who arrived in the rural town of Beolgyo on a mission to kill Jeom-sim’s eldest son as a form of revenge against the man who killed Jae-mun’s childhood friend.
Perhaps it’s due to the duo’s exceptional acting or to the fact that the film was set in a rural landscape, but the story beautifully portrays their love-hate relationship.
Jeom-sim lost her younger son to an accident, but doesn’t want to admit it; Jae-mun feels guilty about his dead mother, and he feels a filial attachment for Jeom-sim when he sees her.
It’s a pity that “Cruel Winter Blues,” which failed miserably at the box office, has decided to package itself as a gangster flick. Instead of wasting scenes on bold stabbings and insults flying between mean male characters like balls on a ping-pong table, the film really should have focused in more detail on the two characters’ encounters.
Instead the film positions itself somewhere between a drama and the macho fantasy in the tradition of Hong Kong mafia films; it focuses on the dramatic conflicts the film’s male heroes feel when torn between love and heartless missions.
It’s evident that the film wanted to pay a certain homage to Hong Kong action flicks, as it openly borrows its Korean title “Yeolhyeol Nama” (which literally means “a cold-blooded man”) from director Wong Kar-wai.
Luckily half-way through the film it makes a subtle transition from cruel action film to love drama. Nevertheless the film is persistently cruel. Jae-mun never gives up his original mission, even after he begins to like Jeom-sim.
Jeom-sim continues to be a victim as she keeps Jae-mun’s attempt to kill her son a secret. When Jae-mun realizes the horrible thing he has done, it is too much for him to bear. Finally, he is killed, and Jeom-sim loses another son.
The film, though, obscures the intentions in the character’s mind until the end. There is a great scene in which a truck passes by the stew joint run by Jeom-sim, shaking the restaurant’s window. At the end of the film when Jae-mun waits for his food to arrive at a restaurant after he returns from killing her son, he feels the same trembling in his body. He thinks another truck has passed by the restaurant, but he realizes shortly before he is killed that what he is feeling is the aftermath of the sobs that racked his body. The scene is ambivalent about whether Jae-mun really cried out of anger or guilt for killing Jeom-sim’s son or whether he had another reason for crying, just like he never really knew whether the trembling he felt came from outside or inside his body.
But the film mercilessly leaves that up to the audience to decide.