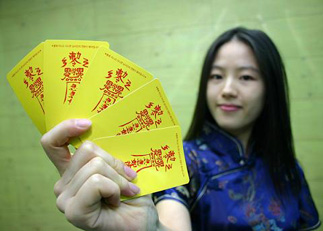 Online gaming is not exclusive to Korea, but it certainly has a stronger presence here than in other countries. It comes as no surprise, therefore, that most online games have special “events” to celebrate March 14, White Day.
Born out of the marketing minds of the Japanese, White Day is a day when men give candy to women.
Here, it is a sequel to Valentine’s Day, Feb. 14, when women give chocolate to men.
Since online games are being used as a platform for dating more and more often, most of the events focus on what guys should do to win the hearts of their ladies.
On Audition, one of the most popular online games that is something of a Dance Dance Revolution in a group scenario, game players can write love poems in the chat window while the game is underway. Later, those that save their amorous chitchat in a file can upload it to a designated Web board and join the raffle for prizes, including free tickets to amusement parks, restaurant vouchers and game consoles.
Priston Tale, a massive multiplayer role-playing game, is letting users with male game characters benefit from acts of chivalry. Male game characters who slay monsters in the game will receive candies as rewards. 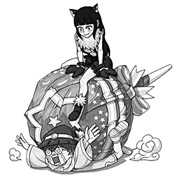 A promotional image for the LaTale White Day event. Provided by Actoz Soft

If these candies are given to a female game character, a small heart will appear above the male game character’s head, which boosts his physical strength by 20 percent.
The action-type role-playing game LaTale has a similar event where male game characters can choose to undertake a certain quest. If the quest is completed, the character earns special skills. One of these skills is the ability to give a female character a protective shield, further enabling male character players to explore knighthood to the fullest.
The quest is only available until March 21, and those interested should seek out someone working at the restaurant Elias. Unfortunately, the special abilities only last for a limited period as well.
For its Nine Dragons games, Nexon distributed 300,000 good-luck charms for “happy dating” in the form of yellow tickets at comic book stores nationwide. On the back of each ticket is a code for cyber game items that are worth about 10,000 won.