The four rivers of Korea begin life as bold spirits

The four rivers of Korea begin life as bold spirits 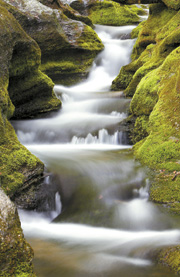 If the things that you hoped would happen in 2007 have yet to materialize, or if you’re having a hard time staying focused, gazing at a powerful stream of water scouring through the ice might be the right way to restore your vitality.
In order to greet the spring in an appropriate fashion, we visited the headwaters of Korea’s four main rivers.
As we look at the tenacity of the rising water at these sources, the innocence and grandeur of the word chosim, meaning an original greenness, comes to mind.
At moments like these one cannot help but marvel at the glorious season of spring. 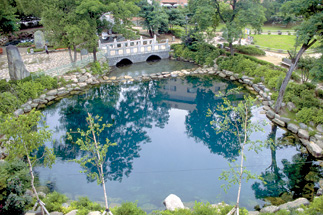 1. Geomnyongso, Taebaek city, Gangwon province (Han River’s source)
We went to Taebaek to enjoy the spring weather, but when we arrived it was rather chilly. After crossing Sansuryeong (a watershed in Taebaek city which separates the Han and Nakdong Rivers and Osim Stream) we saw that snow was covering everything. We were concerned that we’d see the same situation in Geomnyongso.
Our worries were unfounded. Water was gushing so hard from Geomnyongso spring it was almost frightening. The place was almost too big and powerful to be called a spring. The water stays around 9 degrees centigrade and around 2,000 tons of water spill out every day. The stream flows from Geomnyongso through Jeongseon, Yeongwol, Cungju and Yangpyeong, then to Seoul, continuing out to the Yellow Sea. 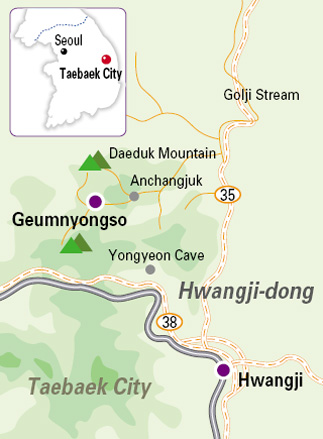 2. Hwangji, Taebaek city, Gangwon province (Nakdong River’s source)
Hwangji was breathtaking enough to make us forget about our fatigue and lack of sleep.
The small but beautiful pond in the middle of downtown made us wonder how so much clear water could rise up in the middle of a busy city. The transparency of the water made for beautiul reflections of the city’s buildings. Compared to the powerful masculinity of Geomnyongso’s spring, looking at Hwangji was like seeing the face of a young girl, just after she had splashed herself with ice water.
However, appearances can be deceptive. Five thousand tons of water flow through Hwangji every day, more than twice the amount at Geomnyongso.
The pond is a part of everyday life for Taebaek residents, so much so that the tranquility at the pond’s location felt like a deception. 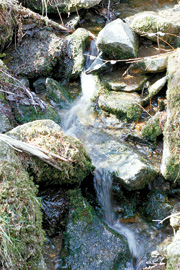 Transportation to Geommyongso and Hwangji
Drive down Joongang Highway 55 (connecting Busan and Gangwon) and change to Highway 38 at Jecheon Interchange. Note that with construction underway from Yeongwol to Taebaek, there will be traffic from Yeongwol. When in Taebaek, Hwangji is easy to find as it is right in the heart of the city. To go to Geomnyongso, take Highway 35 from Taebaek to Gangneung and you will see a sign for Geomnyongso. When this sign appears, take a left and drive for about five minutes, and there will be a parking lot. Park the car and walk along the path toward the water. This takes about 30 minutes.
If you are taking a train, get off at Taebaek station, visit Hwangji first, and then take a cab to go to Geomyongso. The cab fare for this distance is usually 16,000 won (one way). The bus from Hwangji to Geomnyongso only runs twice a day so this can be inconvenient. 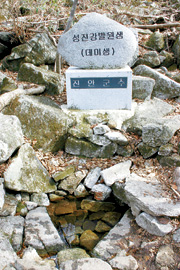 Lodging
There are a lot of motels around Hwangji. Donga Motel (033-552-2365), designated as a distinguished lodging place by the Korea Tourism Organization, is 35,000 won ($37) per night for a standard room. The owners, a couple who have been residing in the area for a long time, will be able to give visitors a lot of information about the area. There are no places to stay around Geomnyongso. The nearest lodging available is Gangwon Land, which is a 20 minute drive from Geomnyongso.

Food
Korean beef is the specialty of the area. The restaurants here use fresh beef from cows reared on the plateaus of Baekdudaegan (the longest strip of mountainous land in Korea, which connects the Baekdu and Jiri Mountains and is located over 800 meters above sea level). The price for a single serving of bulgogi is around 12,000 won, 20,000 won for beef sashimi and 21,000 won for sirloin.

Tourist Spots
The Jeongam Temple Complex is one of the five designated palaces in Korea (the five palaces are called Jeokmyoulbogung, or the Jeokmyoulbo Palaces) that keep artifacts officially associated with Buddha. Nearby there is also Yongyeon cave, which is the highest limestone cave in Korea. The tour around this complex takes 40 minutes and the entrance fee is 3,500 won per adult.

3. Tteunbong Spring, Jangsu, North Jeolla province
After escaping from the distracting trot music emanating from the Subunryeong Rest Area, we came upon Subunryeong village. The village seemed very plain, not at all like a place where a major river would start. “Did you come to see the mulppuraengi [water stream in a Jeolla province dialect]?” asked one villager as we searched for Tteunbong Spring.
After walking around the village for 20 minutes or so we found a sunny spot and there was Tteunbong Spring.
The site wasn’t as impressive as the aforementioned Geomnyongso and Hwangji. It has a homey atmosphere that seems a fitting starting point for the mother of Korea’s rivers. The Geum River connects the granary areas of this country. The peaceful scenery and the warm sunlight made it easy for us to enjoy the spring weather. The area is also where Roman Catholics came and settled around 200 years ago, after fleeing persecution in Seoul.

4. Demi Spring, Jinan, North Jeolla province
The Sumjin River, which flows through the Jeolla provinces, known as the home of Korean cooking, originates from Demi Spring in Jinan. The water from the spring was excellent ― smooth with a hint of sweetness.
Because of its location, on a mountainside, there was still snow that hadn’t melted away, but, depite the cold, the spring had plenty of water rising out of the rocks. The area surrounding the spring felt prosaic, a bit like a local water fountain, but the way up to the spring was charming.
The village below the spring, although it is part of a major local government construction project, is an alluring place to visit.

Transportation to Tteunbong Spring and Demi Spring
If you are driving, take Highway 35 which goes through Tongyeong and Daejeon, and take the Jangsu Interchange and go to Jinan or Jangsu. To go to Tteunbong Spring, take Highway 19, pass Jangsu and go towards Namwon for about 20 minutes. When you see a bus station opposite Subunryeong Rest Area, take a right turn. Park in front of the Subunryeong Village Office. It will take approximately an hour and a half to walk to Tteunbong Spring and back. To get to Demi Spring, take Highway 742 and pass Jangsu, Jinan and Baekun. Before passing Shimam 1 Bridge, take a right turn to Wonsinam Village. Go across the village for one kilometer and you will see a parking lot for the spring. Park here and walk to the spring (it takes about an hour and a half to the spring and back).
When traveling by bus to either Jangsu or Jinan, take a local Mujinjang Yeoggek Bus (063-433-5282) from the bus terminal. The bus will stop right in front of the parking area for both springs. Jangsu taxis charge 7,500 won, one way, from Jangsu to Subunryeong, and Jinan taxis charge 17,000 won, one way, from Jinan to Wonsinam village.

Tourist Sites
In Jangsu, visit Nongae Shrine. It commemorates the Korean gisaeng from the 16th century who is known for her patriotic suicide. The scene around the shrine is quite breathtaking. In Jinan, go to Mai Mountain for a hike.