The difficult art of urban renewal

The difficult art of urban renewal 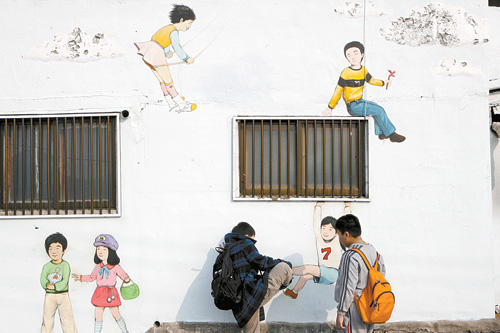 a mural by a group of artists painted on top of a run-down wall.

When the commissioner of the Naksan Project gathered participating artists together last summer, he instructed them to “mix, connect and harmonize.”
“I wanted their works to merge into the neighborhood, and stay there,” said Lee Tae-ho, who is also an eminent art critic. “This was one time when I didn’t want their visions to overpower the atmosphere of the area. I didn’t want them to be intrusive.”
The Naksan Project is an urban renewal project in which artists worked together to improve the living conditions in Naksan-dong, one of Seoul’s poorest neighborhoods.
It wasn’t easy to win the residents’ participation. When artists began a survey to hear how people wanted their neighborhood improved, the initial response was that they wanted no changes.
The residents feared that the project would stop the local government designating the neighborhood as a redevelopment zone ― a move that would naturally boost the area’s real estate prices and allow them to make some money. 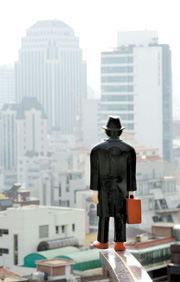 That sentiment still prevails. The neighborhood, with its slate roofs and dingy factories has a long history of struggle. From the 1960s, the labor movement has been active in the garment industry ― to this day there are over 2,600 small garment factories in the area ― and artistic sensibility is considered a luxury by many residents.
Lee Ju-seok, the owner of the Hwasin Sangsa zipper factory in Naksan, grumbled after he saw a mural on a wall near his shop, which was meant to commemorate the achievements of the area’s factory workers.
“What’s there to celebrate,” he said. “It’s a waste of money. They should distribute a bag of rice to the residents instead of hiring artists to paint a pretty wall. That would help us a lot more.”
For Mr. Lee the project was an opportunity to question whether art can bring change to society and improve the lives of impoverished residents. He is left with a mix of doubt and optimism.
“If you walk around the area the sound of sewing machines never stops,” he said. “It was hard, because when we approached the residents to hear about their ideal neighborhood they simply didn’t want anything from us. They were afraid that the project would draw unnecessary attention to their homes and cause trouble, because a lot of them didn’t have a building permit. The tenants were cautious, because they didn’t want the landowners to complain that the artists had made nail marks on the walls. It took us a while before we convinced them that we were not government officials.”
The Naksan Project was initiated last year by the Ministry of Culture and Tourism, as part of the “Art in the City” campaign. The term was adopted from an urban arts movement born in Liverpool during the mid-1960s, led by the British scholar John Willet.
It’s a public project that’s aimed at improving the living conditions in underdeveloped areas across Korea, as a way to prevent social polarization. So far 11 neighborhoods have benefited from the project, with an average of 200 to 350 million won invested in each location. This year the ministry’s budget has been increased to 1.5 billion won.
In the Cheolsan neighborhood of Gwangmyeong City, for example, a group of artists visited the area’s community center over the course of a month to do complete makeovers of elderly residents who are suffering from Alzheimer’s disease. The results were photographed and displayed locally.
The project at Jungheung-dong in Gwangju focused on cleaning up and fixing the area’s abandoned houses; a radio station was set up on the rooftop of a building at the Seongseo Factory Compound in Daegu, to broadcast programs for Southeast Asian migrant workers in the area.

In other areas a collective of designers and woodworkers was hired to replace the swings and slides at a community center. In Mulmangol in Busan, a village where 35 percent of the area’s 1,600 residents are contract construction workers, a totem pole and resting spot were built.
Naksan was rare within the “Art in the City” project, as it covers several districts that include theaters, factories and homes for working-class residents. The urban dynamic was particularly strong in this area, because there was a wide differential in age between young and old people in different parts of the neighborhood, bringing traditional and modern values into contact.
The concept behind the project was a revival of hope and healing. The area had been neglected over the years due to the long working hours and poor living conditions of its residents.
The houses are run-down. Alleys in the neighborhood are too narrow for cars. There is no adequate playground for children to spend their free time.
One of the first things that the artists did as they began the Naksan project was to mend damaged walls, replace the old signs of shops in the area and paint the old cement blocks. 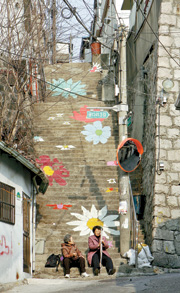 A flower painted on a steep stairway called “gasping hill.

In “Hug” the artist Shin Hyeon-un used the top of a wall to install miniatures of a man and woman running from opposite directions to hug each other. A bench was placed on a hill leading to a park to give residents a spot to sit as they take in the view of Seoul; famous traditional longevity symbols that Koreans believe bring good health and a prosperous life were painted on the wall of a community center for elderly citizens. Traffic signs were redesigned; a shipping container, where delivery men who work for the neighborhood factories come to rest and take naps, was painted with a picture of giant trees and named “White Birch Forest,” giving life to a cold, empty space.
A steep stairway in the neighborhood, which was called “gasping hill,” was painted with colorful daisies as a symbol of joy and as a way of commemorating the hardships that the residents have endured for decades.
The artist Paik Min-jun installed a sculpture of a man holding a red briefcase seeming to walk toward the skyscrapers of Seoul. It hangs in the air connected to a steel rod that is attached to a safety bar.
Han Jemma, an installation artist, attached playful images to the neighborhood’s police station. Made with metal fragments that reference symbols of authority like axes or eagles, they are designed to make the facility more approachable. 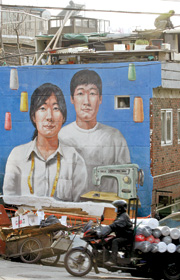 a wall in the vicinity of garment factories with a mural depicting neighborhood workers. By Ahn Yoon-soo

“I think of public art as something that gives us pleasure in life, which allows us to look back on our surroundings with a refreshing new take,” says Mr. Paik. “As I was working on the project I felt as if my work was connecting people within the neighborhood, one part of which had completely undergone development while the other still struggles with basic needs. The whole point of a red briefcase was a sign of energy and passion. The idea of walking on a path toward the city’s center was a gesture of hope.”