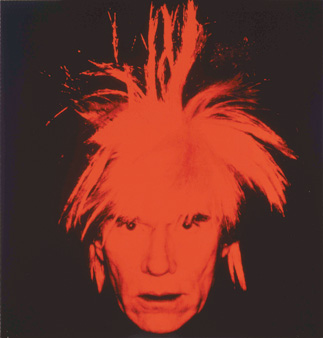 The recent press opening for “Andy Warhol Factory” at Leeum was as fashionable as the artist himself, bustling with female reporters in glamorous outfits from local style magazines. For Warhol devotees, the current exhibit ― one of the first major retrospectives featuring the artist’s work in Korea in recent years ― is a once in a lifetime opportunity. The show features more than 200 silkscreen paintings, photographs, drawings and films mostly produced between 1962 and 1968, when the artist was most prolific. The items are on loan from the Andy Warhol Museum, one of the four Carnegie museums of Pittsburgh, where the artist was born the son of Slovakian immigrants.
It’s an extravagant display; a good fit for a country where even the artist’s lesser-known prints sell like hotcakes almost two decades after his death. The current exhibit, which reflects the “neo-pop movement” among the younger generation of Korean artists and designers, is one hot factory from an art superstar.
Perhaps it’s Warhol’s approach to fame that continues to whet the appetite of art collectors both in and outside of Korea. Never in the history of modern art has there been a visual artist who exposed himself to the media as explicitly as Warhol did while he was alive. Indeed it’s not a mistake to say that the artist’s entire body of work is devoted to the notion of fame and his persona.
He owned over 40 wigs during the span of his lifetime, and took snapshots that play with his own image. His whole career was based on transforming pop icons into art. He practically lived on commissioned portraits of Hollywood celebrities including paintings for Marilyn Monroe, Elizabeth Taylor and Jacqueline Kennedy Onassis. He put consumerism, sex and even politics on the same level as a disposable soup can.
On the other hand Warhol’s works are intentionally soulless, immortalizing plastic images of mass-produced consumer products that stand as icons of American pop culture and a mechanical society. And while some see his style as capturing the democratic ideals of American society ― a can of soup is a can of soup for everyone whether you are a queen or a construction worker ― it also led to many mainstream art critics describing Warhol’s works as being too frivolous. This is in stark contrast to other conceptual artists, like Marshall Duchamp or Jean-Michel Basquiat, who are studied and reinterpreted in the historical context of art.
It’s a different story, however, when talking about his reputation with the public. A great portion of “Andy Warhol Factory,” which is named after the artist’s studio in New York, also features his painting series of popular American products ― such as Campbell’s soup cans and Coca-Cola bottles ― that are coveted by collectors around the world.

The idea of “factory,” however, is not only a metaphor for his artistic content. He repeatedly stressed that he “wanted to be a machine,” distancing himself from emotional attachment by sometimes expressing skepticism about the public response to celebrity deaths and the mourning that takes place in the media. He openly admitted his fascination for plastic idols among Hollywood celebrities.
On hearing the news about the death of Edie Sedgwick, Warhol’s muse who starred in several of his films including “Chelsea Girls,” for example, he was quoted as saying: “I don’t know where she is. We were never that close.” This wasn’t true, of course. Warhol made her a star in his films and was often blamed for leading the model-actress into drug addiction, which she eventually died of at age 28.
Warhol’s fantasy of “emotional detachment” came to an abrupt halt after his death, when his artwork was used to adorn calendars, pocketbooks and postcards at major museums around the world.
It would be an overstatement to say that Warhol’s art was all about fashion, but he certainly played a pivotal role in shifting the art landscape from one of serious creative expression into a form of visual entertainment, even when dealing with critical human issues, like sexuality and even death.
Moreover his motivation for creative experimentation always came from his own life. He was one of the first American artists to openly admit he was gay. He shot a series of erotic photographs of gay artist colleagues and films like “My Hustler” and “Lonesome Cowboy,” which were deeply rooted in the underground American gay scene.
Warhol underwent a major career transition in 1968, when he was shot at his studio by Valerie Solanas, a radical feminist writer. “Shadows of Death,” a segment within the “Factory” exhibit, delves into a series of silkscreen paintings that reflect the artist’s mix of anguish and fascination about death. It features images of guns, electric chairs, skeletons and other images that are based on photo archives of vehicle accidents and suicides that Warhol acquired from various sources. The central idea stayed the same ― the images have casually become a part of life in the American media culture. Yet despite the startling subject matter, they are still laced with humor.

“Tuna fish Disaster,” a black and white silkscreen on linen, almost stands as a parody of his earlier Campbell’s soup can series in that it presents an image of a popular consumer project while hinting at an ominous death narrative in the title.
“Andy Warhol was a pop artist but he was more than a pop artist,” says Thomas Sokolowski, the director of the Andy Warhol Museum. “He was basically fighting two battles in his work. One was his battle to reflect society. And the other was the battle in the history of art. Andy Warhol was creating his works when abstraction by Mark Rothko and Jackson Pollack was considered art. There were people that said ‘If an art work is too beautiful you should spit on it.’ Warhol had a different idea of art. He believed that art should be beautiful, that art should be recognizable and enjoyable. In this matter Warhol created work for the public, works that the public would like and enjoy.”


On April 13 at 2 p.m., Geralyn Huxley, the Curator of the Film and Video section at the Andy Warhol Museum is giving a talk on the artist’s works. On Saturdays and Sundays the museum plays Warhol films including “Chelsea Girls” (Sunday at 2 p.m.) and “Sleep” (Saturday at 11 a.m.). “Andy Warhol Factory” runs through June 10 at Leeum, Samsung Museum of Art. Admission is 7,000 won. English docents are available on Saturday and Sunday at 2 p.m. To get to the museum take exit 1 at Hangangjin Station (line No. 6). For more information call (02) 2014-6901.