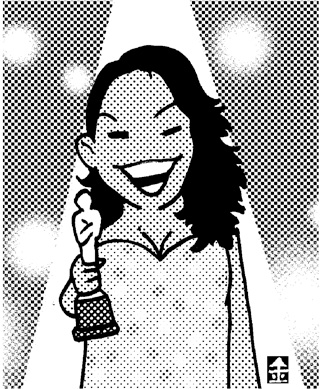 The highlight of the movie “Dreamgirls” is the voice of Jennifer Hudson, who plays the role of Effie White. Her explosive singing has thrilled moviegoers; she even outshines the popular singing star Beyonce Knowles, who plays the role of Deena Jones. Ms. Hudson delivers a powerful performance with her voice and through her dramatic portrayal of the betrayals, setbacks, challenges and conquests of her character’s life.
Jennifer Hudson is truly a dreamgirl in real life as well. Her hometown Chicago has declared a “Jennifer Hudson Day.”
Dreams are ingrained into the culture of America according to “The Culture Code” by Clotaire Rapaille. “Dreamgirls,” which is based on the story of The Supremes, a 1960s African-American trio, was a success because of this cultural code. Effie is not beautiful like Deena. She proclaims, “Singing is the only thing I can do,” but she achieves her dreams anyway.
This standard applies when selecting a president. Americans look for a president with vision and courage. The president must provide a vision for the future of America and possess the courage to make it happen. Rapaille cites George Washington, Thomas Jefferson and Abraham Lincoln as examples. George Bush senior, who considered vision inconsequential, lost his bid for reelection.
Americans do not expect their presidents to be perfect. In fact, they are wary of presidents who assert their perfection; they want their presidents to be youthful ― or at least vigorous. There are two codes regarding youth. One type is the challenging, effervescent spirit epitomized by Effie and the other refers to the desire to escape from the reality exhibited by unskilled “kidults.”
The movie “Little Children” depicts the second code; as the title of the movie suggests, this is a story about “adult children” who refuse to grow up.
To which side do our presidential hopefuls lean? Are they like Effie or are they like the characters from “Little Children?”
Voters are very interested in the upcoming presidential election; however, the candidates have been anything but breathtaking.
President Roh Moo-hyun confessed that he promised a 7 percentgrowth rate when he was a presidential hopeful back in 2002 because his rival offered 6 percent as his campaign promise.
Candidates avoid the urgency of sensitive national issues like the FTA talks. The presidential hopefuls from the Grand National Party are busy fighting about their primary election rules. They seem to be the under the illusion that they have already seized power.