Paintings that live in the heart and home

Paintings that live in the heart and home 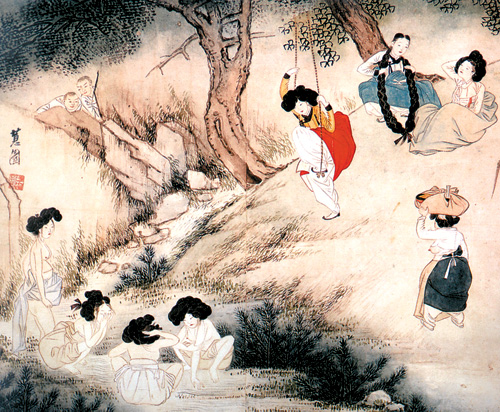 
13th in the series | Genre Painting 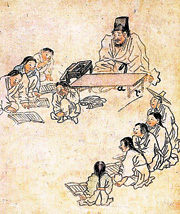 Less than a decade into the new millennium, the separation between art and ordinary life is diminishing. With public art projects and pop art evolving to new heights, creating or enjoying art is a daily phenomenon. Public murals are a feature of most apartment complexes in Seoul and Warhol’s soup cans or Van Gogh’s sunflower can be bought in the medium of one’s choice ―as a T-shirt, a pen, a screensaver or even a shower curtain.
It is now hard to imagine that art, with the exception of religious painting, was once a preserve of the rich and its subject matter rarely involved the lives of the common man. Like Warhol’s cans, the work of Kim Hong-do (1745-1810), a painter who defined Joseon Dynasty pungsokhwa or genre painting (the art of representing scenes from everyday life), is now recreated and reinterpreted to fit any occasion.
In a prison cell in Danwon Police Station, in Ansan, Gyeonggi province, the area in which the artist lived from age seven to his 20s, Kim’s “Sagepungsokdo” (“Portrait of Four Seasons”) has been reinterpreted in bold strokes of lavender and pink. Three people, including an art student and an art fair director, spent five days last month painting the mural.
At a press conference they said they wanted to assist in developing culture and art in Ansan by “taking a small step, by changing a dark prison into an amiable space.” In fact what they were doing, consciously or not, was paying homage to Kim as one of the first proponents of public art in Korea. Before there were murals in Naksan or soup cans in the Leeum gallery there was Kim, painting for the people.
Kim’s “Sagepungsokdo” would have been impossible without Han Si-gak (1621-late 17th century). A majority of Han’s contemporaries spent their lives as visual recorders, drawing important events and functions on orders from the royal palace. These documentary paintings, called gungjung girokhwa (gungjung, meaning palace and girokhwa, meaning document paintings) were stylistically rooted in the 16th century, when the architecture and people were depicted through symmetrical line drawings, without much sense of movement or expression.
Gradually changes started appearing during the 17th century, when scenery and landscapes were drawn in harmony with the palace and the event that was taking place. In “Hamheungbangbangdo,” (a painting of scholars taking a national exam) a glimpse of Korean genre painting can be seen on the far left side where two farmers are plowing a field. The detail is almost unnoticeable, as it is such a tiny part of the painting, but the work was one of the first to portray the lives of common people and their activities. 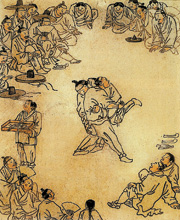 From these small steps, Korean genre painting emerged as a popular trend during the 18th and early 19th centuries with artists like Kim Hong-do, Shin Yun-bok (1758 - early 19th century) and Kim Deuk-sin (1754-1822). They each picked diverse subject matter from the lives of commoners, and sometimes portrayed the nobility with a sardonic undertone. Artistic technique developed as well, with the paintings becoming more three dimensional. For example, facial expressions were drawn to show emotional depth, straying from the linear, both in style and context.
“Korean genre painting had always been in our culture. There are records of wall paintings dating back to the Goguryeo Kingdom which portrayed the activities of the everyday man,” said Lee Su-mi, a researcher at the National Museum of Korea who specializes in Korean genre and folk painting. “However, it became very popular during the late Joseon Dynasty because people really appreciated seeing their daily lives unfold in paintings, whereas, in the past, painting existed to document important events or the nobility.”
The change in subject matter and technique also reflected changes in social class. A new group of art aficionados, mostly petit bourgeois merchants, started to buy art and sponsor artists.
Korean pungsokhwa had humble beginnings. The term sokhwa was used by the officials and nobility of the Joseon Dynasty to refer to “common” or even “vulgar” painting.
However, the democratizing spirit that swept Europe in the 17th and 18th centuries and evolved into the Age of Enlightenment had some parallels in Korea. There was a shift toward a more modern philosophy in paintings. It became acceptable to view the everyday lives of common people as a suitable subject for art.
One of the most important figures in this development was Yun Du-suh (1668-1715), a scholar and painter. His paintings were praised for their detailed observations and intuitiveness ― qualities that influenced later genre painters. He was an innovator in the art of depicting emotions, humor and irony. However, pieces that can be classified as Korean genre painting are just a small aspect of his work, much of which reflects upon the philosophies of the era’s upper class, with strong influences from Sung Confucianism as well as many Buddhist paintings.
With painters like Yun and Cho Yeong-suk (1681-1761) paving the way, the late 18th century saw many artists joining the pungsokhwa movement. The popularization of genre painting was amplified by an increased interest in artistic realism.
The ascendancy of genre painting is inseparable from the rise of Kim Hong-do. To say Kim is synonymous with Korean genre painting during the late Joseon Dynasty would not be an exaggeration. He raised the bar for the genre as well as for painting in general. His standards were higher than any of his contemporaries and his work became the benchmark for Korean genre painting as he touched subjects from farmers laboring in the fields to lovers serenading each other.
His artistic career can be divided into two main parts, before and after 1795, when he was dismissed from the royal court. During the latter phase, Kim concentrated on drawing landscapes instead of the portraits, animals and document painting that occupied his early career. Although Kim’s late works are considered to be superior in technique, the paintings he did in his late 30s and early 40s are loved for the affectionate and articulate way he portrayed everyday activities, especially farm life, as well as his skill in creating a harmonious, architectural balance.
In his painting “Ppalraeteo” (“Wash Place”) Kim’s witty satire comes to life as he draws a scholar hiding behind a fan and some rocks to peek at women as they wash clothes in a stream. In “Ssireum” (“Korean Wrestling”) his sense of aesthetic balance is apparent as he draws the audience in a circle which also frames the painting. The expression worn by each member of the audience is unique and his composition is well balanced.
Along with Kim, Shin Yun-bok was the driving force of Korean genre painting.
Unlike Kim, Shin concentrated mostly on drawing scenes from urban life as well as the relationship between the sexes. His sensual eroticism was one of the first major instances in Korean painting in which sexuality was expressed a direct and bold way.

In one of his masterpieces “Miindo” (“Portrait of a Beautiful Woman”), Shin’s sophisticated, realistic aesthetic is very apparent. Considering that the late Joseon dynasty, with its heavy emphasis on Sun Confucianism, was extremely conservative, Shin’s paintings were radical in the way he portrayed Seoul’s nightlife, the pleasure-seeking upper class and their hypocritical behavior. This also contrasts with Kim Deuk-sin, another trend setter in Korean genre painting during this era, whose subject matter and theme did not stray too far from that of Kim Hong-do.
After Kim Hong-do during the late 18th century, and Shin and Kim Deuk-sin in the early 19th, there were almost no works by Korean genre painters that improved upon their predecessors. Except for a handful of artists, most genre paintings were mere copies, ornamental pieces or pornographic sketches.
Pungsokhwa, however, hasn’t disappeared altogether. “Genre painting is about drawing one’s experiences and incorporating one’s own artistic merit in the work. It’s such a universal core of every art work that I believe it will live on in some form or another,” said Lee Su-ji, an artist who has done genre paintings since the 1970s. He also has several books published about pungsokhwa as well as an exhibition titled “Lee Su-ji ― a new world of art” at Gwachun Sunbawi Gallery through April 30, featuring his version of modern genre painting. “When I started in the 1970s, the push towards preserving and developing our art was going downhill. I started with the aim to preserve traditional art,” he said.