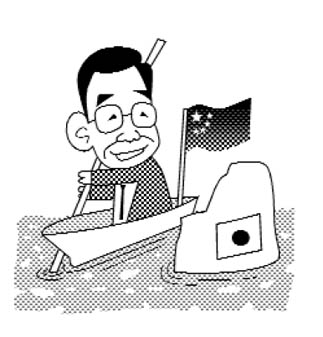 It was Japan that made the first move to form a friendly relationship with China. In September of 1972 Japanese Prime Minister Kakuei Tanaka made a visit to China, normalizing ties with the communist state. His diplomatic move was so surprising to the world that it was referred to as the “Tanaka Shock.”
It was an example of pragmatic Japanese foreign policy as Japan has wanted the diplomatic tie since the 1950s, and had not severed economic and cultural exchanges with China.
Beijing also displayed a drastic and strategic attitude.
It consistently maintained a position not to demand reparation for past damages and not to make an issue out of the U.S.-Japan security treaty.
On his visit, Mr. Tanaka received carefully planned hospitality. Red bean rolls from a famous Tokyo bakery were available at his lodging, and his breakfast included miso soup made with the soybean paste from Mr. Tanaka’s hometown of Niigata Prefecture, Japan. “This is the miso soup I used to have at home,” he said. He was impressed by the meticulous service.
Partly thanks to such a warm reception, the two countries’ relationship steadily grew amid the Cold War.
Japan provided the maximum assistance to China. The construction of Baoshan Steel Works Complex, which became the growth engine of China, was largely financed by Japanese assistance.
In 1992, Emperor Akihito of Japan made a visit to China.
Celebrating the 35th anniversary of diplomatic ties, the China-Japan relationship is once again riding high.
Chinese Premier Wen Jiabao’s Tokyo visit in April means a complete restoration of the estranged relationship of the last six years since Prime Minister Junichiro Koizumi’s Yasukuni Shrine visits. Mr. Wen expressed a hopeful attitude when he said, “If Prime Minister Shinzo Abe’s visit to China last year was a trip to break the ice, my visit to Japan will become a trip to melt the ice.”
Coincidentally, this year is the 70th anniversary of the outbreak of the Sino-Japanese War.
The year 2005 marked the 40th anniversary of the normalization of Korea-Japanese ties and the 100th year since the Eulsa Treaty that made Korea a protectorate of Japan.
The year was designated the “Year of Friendship,” but the two countries’ relationship had hit rock bottom.
The world is watching whether China and Japan can again display the wisdom demonstrated 35 years ago.