[TV review]‘Knowledge’ is in the eye of the beholder

[TV review]‘Knowledge’ is in the eye of the beholder 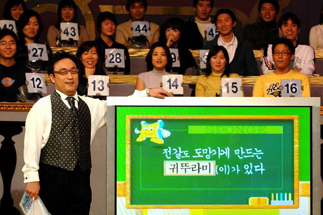 A scene from “Sponge,” a show that presents and verifies pieces of knowledge. [KBS-TV]

Knowledge is power, said Francis Bacon, the 17th century English philosopher. To me, a plebeian 21st century writer, knowledge just seems dangerous. I am not challenging an aphorism of the philosopher who gave birth to the Baconian method of logical induction. However, I cannot help but wonder if knowledge is really power when different shades of knowledge already inundate the world.
People make judgements based on their knowledge, and sometimes force these judgments onto others. This is a type of violence ― well, at least from my perspective. Especially in this day and age when a computer click delivers a sea of knowledge and opinions, what we need appears to be freedom “from” speech instead of the classic freedom “of” speech.
People argue that objectivity guides knowledge, but they are objective only from their own subjective perspectives. All of us have different backgrounds, living conditions and ways of thinking. Therefore, the “logical” conclusions that people reach are actually colored by their individual experiences. This leads to many different kinds of “empirical” judgments and decisions.
Take an example from “Naver Knowledge In” (“In” is a pun; in its Chinese character form, it also means “human”), an Internet portal service where Internet users can ask and answer questions. To a posting that asked the difference between “Knowledge is power” and “Ignorance is bliss,” there were about 13 answers from Internet users by last Friday. The answers included, “It’s of course good to know something” and “I turned 25 this year, and I think that ignorance is better than knowledge.” Those answers reflected the personal experiences of the respondents, but to them, they were “knowledge.” Likewise, we think our personal set of beliefs belongs to the realm of truth, but we should be modest enough to know and admit that we can be wrong. Human beings, we must remember, are feeble creatures.
A recent episode of the KBS-TV show “Sponge” taught me a lesson about something that I thought was “true, empirical knowledge.”
“Sponge” is a television version of the Internet portal’s service, yet more effort is given to verifying facts. Airing Saturday at 6:45 p.m., the show each week challenges a bit of widely-held “knowledge,” which is presented by selected viewers. It first grabs the audience’s attention by making what the audience assumes is a simple statement of fact. Then, it conducts experiments or listens to related experts to see if what everyone thought they knew is really true.
On a recent episode, the show claimed my favorite poem, penned (I thought) by the celebrated courtesan from the Joseon Dynasty (1392 to 1910), Hwang Jin-yi, did not actually exist. The poem, originally translated into Chinese characters, “What art thou thinking under the bright moon?” was actually an adaptation of the 20th century popular song, “Do You Know?” sung by Lee Seon-hui and written by Yang In-ja.
Until now, I have always believed that the poem was several centuries old. Even after the show started, I still believed my “knowledge” about the poem, which I have lived with for several decades, was correct. However, the show did a flurry of interviews with informed sources, and it turns out my favorite poem is indeed an adaptation of a 20th century song. A novelist who wrote serial stories on the Joseon Dynasty courtesan rewrote the song as a poem with the songwriter’s permission.
So the show proved that I was wrong, and once again, I realized how dangerous it is to blindly accept a piece of knowledge. We must be unknowingly surrounded by misunderstandings resulting from mistaken bits of “knowledge.” What is more serious is that many of us are not ready to admit that we can be wrong. Tolerance is a lonely word, especially , after all, when we judge others based on our “knowledge.”