A survival guide for women in films

A survival guide for women in films 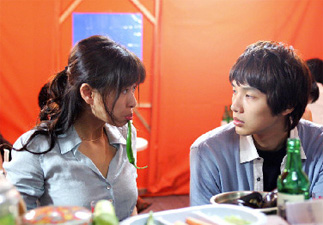 I always find it interesting that most films that have a single thirty-something woman as the heroine are either romantic comedies or thrillers. This is an alarming sign. It seems that women can no longer survive in films by being the star’s trophy wife, but we still have a slight chance if we are willing to acknowledge the fact that we are ludicrous underdogs.
Why can’t we tell our stories without ridiculing ourselves?
Women have to act fast. By the time an actress is in her 40s she will be lucky to star in a horror film as a virgin ghost staggering out of a television monitor. (See the Japanese film “Ringul.”)
“Old Miss Diary” is a film adaptation of a television sitcom about a 32-year old bachelorette with lovable flaws. She has a vision of chopping off a man’s foot after he accidentally hits her knee on a cramped subway. When a handsome young male colleague offers her a drink after work, she worries that she’s about to be fired. She has other issues, like men in her life who are perverts or womanizers and intolerable coworkers she’s had a crush on. If the story rings a bell then it’s worth noting that the name of the film’s heroine, Choi Mi-ja (played by Ye Ji-won), is, in Korean, just as bland as her cinematic predecessor, the famous English spinster Bridget Jones.
Indeed the two women have many similar characteristics.
They both use a diary to reveal painful slices of their singleton lives; they both work in the media (Jones works in public relations for a publisher, Choi is a voiceover artist for television films); they have loving girlfriends for company in karaoke bars every night as they drench themselves in boilermakers. And, most of all, they are still waiting to be rescued by their Prince Charming.
The film admits at the beginning that the chances of the heroine meeting a proper bachelor once they are past the age of 30 are “as likely as a pilot surviving after a plane crash from 20,000 feet.”
Yet this is a romantic comedy, and thus the heroine always gets her way in the end. That’s the hook for women who are addicted to romantic comedies. The films nourish your dreams, and lead you to hold onto hope, but in the end you never learn anything about yourself except romantic comedy’s essential lesson that teaches women to be themselves, as long as that means being cute and klutzy.
While it’s true that every woman is beautiful “just the way they are, despite their flaws,” to quote Mark Darcy speaking to Jones in “Bridget Jones’ Diary,” it sometimes feels as if scatterbrained incompetence is increasingly the only way for bright, single women with a career to prove our femininity to men.
Despite all this, “Old Miss Diary” is warm and funny. There are a few too many slapstick jokes about old women but it’s hard not to sympathize with a heroine who naively believes in the goodness of her heart and tries to find her own way, despite having been raised in a working class family by an incompetent single father and widowed grandmothers. I felt like I wanted her future to be blessed in some way, even if she doesn’t meet someone special in the end.