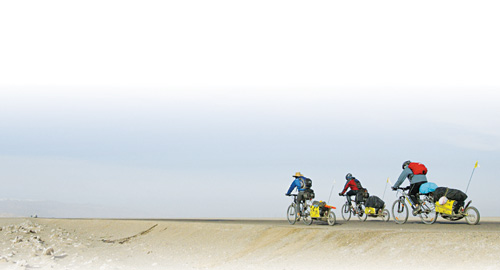 Crossing the desert toward the Aerjin mountain range. Provided by Nam Yeong-ho

Departure:
7:30 a.m., May 6, 2006.
Four men, Nam Yeong-ho, Choi Da-un, Park Jeong-heon and Kim Hyeong-uk, set their feet on the pedals of their bicycles. They were about to depart from Tianjin, China. Their objective was to reach Lisbon in Portugal, a trip of approximately 18,000 kilometers, or 11,200 miles, across 13 countries of the Eurasian continent.
The first day was full of mistakes. One of the riders read the map wrong and they got lost. Each leg between stops took longer than they anticipated. It was 11 p.m. when they arrived in Beijing, their first destination.
“We were supposed to go 25 kilometers an hour,” Mr. Nam said, remembering the journey. “But we were too slow. I was feeling desperate after the first day.”
For 10 hours a day, they were on their bikes. Each had a loaded trailer that weighed 50 kilograms (110 pounds). The trailer included their cooking utensils and bicycle parts for the 235-day expedition.
Aside from Mr. Park, who had experienced a life-threatening accident in the Himalayas, no one in the group had ever gone through such a tough ordeal. Although they had accumulated 2,000 practice kilometers in Korea, the actual journey was tougher than they anticipated.
Muscle cramps frequently stopped them from pedaling. The bicycles jerked over bumps and left their buttocks purple and bruised. Mr. Kim had a particularly tough time, complaining his feet turned much bigger when they got swollen. He ended up cutting open the sides of his shoes to improve his circulation.
The heat was unbearable. It was only May, but the inland temperature rose to 35 degrees centigrade (95 degrees Fahrenheit) during the day. The rays of the desert sun bore down , while the sweltering heat from the ground stifled them.
Choi Da-un said Mr. Park was his inspiration to keep going. 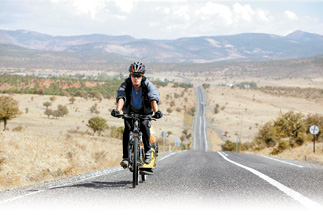 “I saw him holding on to the handlebars with his two thumbs and he held on to the brakes with his knuckles,” Mr. Choi said. “H rode without complaint so I decided I had to go on.”
The four men passed Xian and followed the path of the ancient Silk Road. After a few days they developed an acceptable rhythm. They traveled between 150 and 200 kilometers a day, resting for 24 hours every five days.
“At first, we dropped dead as soon as we reached a hotel,” Mr. Nam said. “But later we got used to the effort, and we were relaxed enough to go for a short tour around the city at night. Sometimes we had beer. We were beginning to enjoy the trip. It looked like everything would go well all the way to Lisbon.”
Drop out:
Just as they got adjusted, a new problem occurred. A feud broke out. They were in Qinghai Province, about to start a 3,200-meter climb up a mountain. Mr. Kim had fallen behind ― the other three riders asked him if he was okay. He said his chronic disc problem had flared up. He began to experience severe shivering and he said he felt exhausted. So they stopped pedaling and got a lift from a vehicle. They blamed Mr. Kim for the unwanted expedient they had to choose.
“We should have been nicer to the sick boy,” Mr. Nam said. “We were all tired and our words were not nice. I think he was probably very upset. Now that I think of it, I am very sorry.”

Only the beauty of the landscape cheered them up. When they rode on the Karakoram Highway, the world’s highest international road, which connects China and Pakistan, they passed snow-capped mountains at an altitude of 7,000 meters, their bicycles passing close to deep glaciers. The Taklamakan desert, or the Desert of Death, in Central Asia, put the bikers through a terrible trial, although the scenery was amazing, with endless sand dunes unfolding before them.
“When I first saw them, I wanted to stop right there, and go back home,” Mr. Nam said. “But I kept reminding them that ‘we can’t stop here, not now.’”
After 10 arduous days in the desert, the troupe arrived in Pakistan and Mr. Kim said he wanted to quit. His mates were shocked. Mr. Kim said it was because of his disc problem.
Park Jeong-heon also wanted to leave. He reminded them that he had only agreed to accompany the team until it reached Pakistan. And so there were two, and they had 12,000 kilometers to go.
On the morning of July 13, two men started out. They stopped talking to each other. It was the only way to move faster, they said.

The traverse:
The journey continued. Fortunately, the two remaining bicyclists had more chances to meet local residents as they traveled.
In Turkey, they got lost. But they came across a good Turkish Kurd family who told them they could spend the night with them.
“Honestly, we were nervous at first. But they were very friendly people,” Mr. Choi said. “We were feeling at ease and fell asleep, but we jumped up when we heard the sound of a gun being fired at dawn.’
“I thought, ‘We’re going to die now,’ but we found out it was only the family’s grandfather using his rifle to catch a bird for breakfast,” he said.
The two travelers said they met plenty of warm hearts along the way. They were crossing the Punjab province’s Mian Channu region, when Mr. Choi suddenly fell sick from a stomach ache.
“The proprietor of the small hotel where we stayed ran all over the place to find a cure for me,” Mr. Choi said. “He took me to a hospital, and looked for other Koreans who might live nearby. I saw his eyes fill with tears when it was time for us to leave.”
Mr. Nam said he believed they could not have met so many local people if they weren’t traveling on bicycles.
“Meeting people is the part I want to cherish the most,” he said.
The ride from Turkey’s Bosphorus Strait to Italy and then along the French coastal highway was a comparative delight. Unlike the difficult conditions in China and Pakistan, the ride was relaxing, with a magnificent view to relish. But Mr. Nam blamed himself for becoming too relaxed and forgetting to be careful at all times. As they were pedaling on a dark provincial highway, he heard a scream behind him.
“I turned and saw Choi rolling on the ground. He had been struck by a hit-and-run driver,” Mr. Nam said.
The doctor there said Mr. Choi had broken his wrist and that he couldn’t continue riding a bicycle.
“Nam and I hugged and cried for a long time,” said Mr. Choi. “I was almost there. I was really upset.”
“I dismantled his bicycle for him,” said Mr. Nam. “I didn’t know what to say. I was sorry, regretful. I didn’t want to go on without him. I think that was the most difficult point in the journey.”
So that left only Mr. Nam to complete the journey. On Dec. 26, he arrived in Lisbon, Portugal. He spotted several road signs on the way indicating that he was nearing his final destination: Roca Cape. At the cliff a panorama of the Atlantic Ocean came into view. There was no more road for him to pursue.
“Choi was there already by car, waiting for me at the cape,” Mr. Nam said. “When I saw him, I felt myself crying like an idiot.”
“I thought, ‘I have finally done this.’ I was very proud of myself,” he said.

“I knew I should have been there with him,” said Mr. Choi, remembering how he felt watching Mr. Nam’s bicycle coming toward him. “But at least one of us made it. And I am happy I accepted the chance to challenge my limitations.”

Epilogue:
Mr. Park is currently in Nepal. He took up alp paragliding and mountain bicycling after he fell out of the four-man expedition. He said he is planning to start speed paragliding, a combination of skiing and paragliding.
“My new goal is to conquer the seven highest peaks in the world without help from an engine-powered craft,” he said.
Mr. Kim also went back to Nepal after he recovered from his disc problem. He has completed hikes around the major mountains there. Mr. Choi, still an engineering student, said he changed his mind about his future plan, after the expedition.
“I want to do work that involves traveling,” he said. “Bicycling changed my life.”

Mr. Nam has climbed over 100 mountains. He has also been trekking in the Alps. But he still felt he hadn’t done enough exploring, so he decided to traverse the Eurasian continent. He refused to take convenient forms of transport like an airplane, car or a train. He wanted to meet people. Going by bicycle seemed like the best choice. He quit work and found some others who would join him. He called the journey an “expedition,” and he became its leader.

“We are looking for someone who will cross the continent with us on bicycle.” That was the ad Mr. Nam posted on the Internet, and Mr. Choi saw it. He felt his heart beat faster. He had always wanted to go on an unforgettable trip and he saw the ad as his chance to make his dreams come true. Mr. Nam later said Mr. Choi impressed him with his strong will to join the adventure. Mr. Choi said he wanted to fight against his own limits.

In January 2005, Mr. Park was descending from the Cholatse peaks in the Himalayas. His friend suddenly fell into a crevasse. Mr. Park had already suffered two broken ribs, but he held onto the rope and saved his friend. He lost eight fingers in the accident. Back in Korea, there was not much he could do, and he began to wander. One day Mr. Nam found him. Mr. Park refused to join him, but two days before the departure date he changed his mind. He chose the adventure as a substitute for climbing mountains.

Mr. Kim likes mountains. He also likes adventures. He was an alpine climber in school and spent over 150 days a year camping out in the Jiri and Seorak mountains. He met Mr. Nam when he was on one of his hikes. One day, Mr. Nam made a suggestion: “Let’s start from the east and end in the west. We’ll be traversing the continent.” It was an exciting idea. At the time he was suffering from disc pain, but he decided that was not going to keep him from a great adventure.