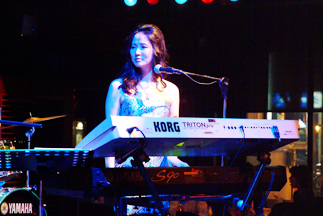 Fusion food, hybrid designs and cross-cultural identities have become the fabric of the 21st century, and members of the Chong Keum-hwa Ensemble reflect the trend. They are as diverse in their nationalities as they are musically. Chong Keum-hwa (Korean ― vocalist), Eugen Bazijan (Ukrainian ― cellist), Sergey Didorenko (Russian ― violinist), and Siggi Stehli (German ― electric piano) fuse jazz, classical, folk and pop music in a uniquely parallel way. The classical and jazz sounds stay pure, but the scintillating artistic arrangements create music that matches the contemporary world.
Chong was a student at the German Munich Jazz School, and her velvety voice may move you to tears. She has performed extensively in Korea and Europe. Bazijan and Didorenko are both classically and jazz-trained musicians. Stehli is the producer and leader of Germany’s renowned big band group, Jam Factory Band. All four bring a distinctive musical ingredient to the table, making a special recipe for a new musical experience.

The show starts at 7 p.m on Saturday at the National Theater of Seoul. Ticket prices are 30,000 won ($32) to 90,000 won. If you purchase tickets by Friday through Visual Sponge Project, you receive a 15 percent discount. You can send money to Woori Bank (Visual Sponge Project) 1005-301-140524, and pick up tickets at the box office (under the name on your account). For more information, call (02) 2145-4744. The theater can be reached from exit No. 2 at Dongguk University station on line No. 3. A shuttle bus runs every 10 minutes from one hour to 20 minutes before the performance, outside Taegeukdang, near the station.