A smart and affordable way to go

A smart and affordable way to go 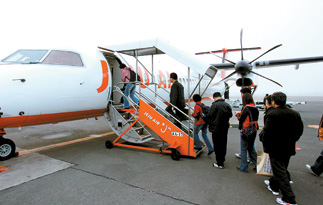 The launch of Jeju Air has made the trip to Jeju island more affordable and more fun.
Despite the extra noise and vibration of its Bombardier Q400 turboprop airplane, Jeju Air has been doing quite well since its launch in June 2006. Now Jeju Air flies between Gimpo and Jeju, Gimpo and Yangyang and Busan and Jeju. The airplane has two rows on each side with a narrow alley in the middle, and there is one only restroom. The back cushion of the seats is thin but the seats have more leg room. Flight attendants only serve water. A one way flight between Seoul and Jeju costs less than 60,000 won. Flyers can also charter the 74-seater turboprop airplane for 4 million won ($4,200) for a one-way trip between Gimpo and Jeju international airports, during weekdays (except on Fridays). It is possible for one person to reserve all seats but such a reservation must be made one month prior to departure .
For information, call (064) 1599-1500 or visit www.jejuair.net.