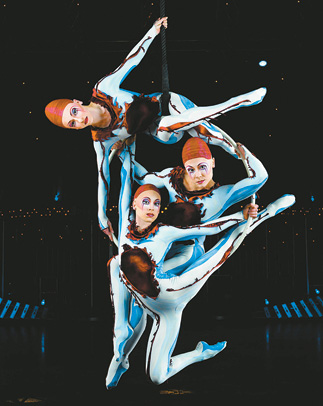 On the Grand Chapiteau (Big Top) that was recently put up near the south gate of Jamsil Sports Complex, there are four flags that symbolize the international identity of Cirque du Soleil, a traveling troupe of performers that has become one of the most successful entertainment companies in the world.
There are Canadian and Quebecois flags, which represent the troupe’s birthplace in Canada’s Quebec province, the Cirque du Soleil flag in blue and yellow stripes and a Korean flag. The fourth flag varies, depending on which country the troupe is visiting.
The flags suggest that the troupe is a post-modern version of the nomadic tribes that once trekked along the Silk Road of Asia. Like them, Cirque du Soleil pitch their tents every time they arrive in a new place. The result is a small village that hums with life. 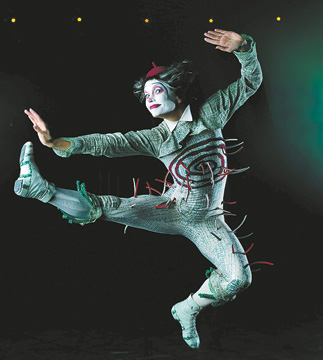 For “Quidam,” the show that marks their debut in Korea, they have arrived with 55 containers, each about 48-feet long, containing over 750 tons of equipment.
Their mobile encampment includes a tent with steel masts, a box office, a kitchen, a school for young performers, offices, warehouses and electric generators. In fact, the only local infrastructure their production relies upon is the water supply, telecommunications and the chefs they hire and then train to provide the right food for the performers. The troupe travels with around 160 staff including a masseuse, two physiotherapists, four rigging designers, 53 performance artists, an artistic coordinator and technicians. It’s a remarkable group, considering that Cirque du Soleil started in the small town of Baie-Saint-Paul, Quebec, in 1984, with just an accordion player, a stilt-walker and a fire-eater.
Still there are aspects of the show that change in every city, like the environment where they set up their tents and local customs they must adjust to, depending on a country’s culture mores.
In Valencia, Spain, for example, their big top was installed on a beach that was so close to the water that the audience could hear the waves.
During their last show in Dubai, which was held in a giant parking lot at the city’s shopping mall, they had to put an extra piece of silk around the waist of a female acrobat because she wasn’t “covered enough,” according to standards set by the city’s government.
“The interaction with local residents is definitely a big part of the show,” says Pascale Beaulieu, a publicist for Cirque du Soleil. “In Spain they clap, stomping their feet on the ground between acts. In France, the reaction is much more subtle and reserved, whereas in Argentina the audience members talk loudly throughout the show.”
The show that will be performed in Seoul is the story of a young girl who dreams about the imaginary world of Quidam in her family’s living room, as an escape from reality. The story’s narrative, however, is just a foundation for the show’s alluring visual display, which has been the troupe’s trademark for decades. 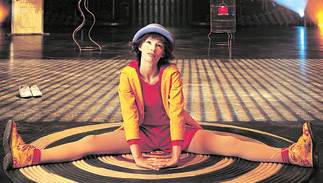 Like all Cirque du Soleil shows, “Quidam” is non-verbal and does not use any animals. It incorporates conventional acts from the traditional circus repertoire ― like juggling, breathing fire, spinning in mid-air, and tightrope walking ― while creating entirely new circus techniques deploying high-technology and mechanical gadgets. The acts include extravagant circus equipment like aerial straps, which allow the artists to pose gracefully and dance in midair.
In “Spanish Webs” the performers presents a group act in which they their bodies to form a spider web in mid air, using trolleys on overhead tracks. The show also features the “German Wheel,” where acrobats perform somersaults through metal hoops; “Banquine” is by 15 Slavic artists who form human pyramids with synchronized movements; and “Cloud Swing,” an aerial acrobatic performance above the main stage.
Conceptually, the performance dips into the urban landscape of an anonymous society (“Quidam” means “an anonymous passer-by” in Latin) that is supposed to be a place of hope. Since it premiered in Montreal in 1996, the show, which was devised by Franco Dragone, has had exceptional success with audiences around the world.
Perhaps the visual luxury of the show’s costumes and props, which are hand-produced by the in-house staff for each show, has something to do with its fame (they stage 14 different shows around the world including six touring shows, an arena show and seven resident shows in Las Vegas, Orlando and at the Theater at Madison Square Garden in New York starting in November).
In the company’s studio in Montreal, a team of props designers keeps an “idea chest” filled with objects to trigger new ideas. The result is always worthwhile.
An old toaster from a closet turned into a radio in “Quidam.” In the show called “Dralion,” an empty pop bottle was made into an hourglass while plastic toy snakes were incorporated into an actor’s moustache. 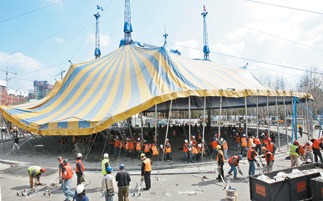 The bathing suits worn by synchronized swimmers in “O,” Cirque du Soleil’s aquatic spectacle that involves swimmers, divers and a 1.5 million-gallon pool of water, a team of specialists was hired to produce a tailored bathing costume that makes the least amount of bubbles when the performer enters the water. The musicians’ hats from the show “La Nouba” were made out of recycled paper from Paris while the bungee costumes used in “Mystere” each had over 2,000 sequins, all applied by hand.
A peek inside the troupe’s tents in Seoul shows just how hard they work.
To raise their Big Top tent, which is manufactured in Bordeaux, France with flame retardant canvas, more than 70 staff work to erect steel poles that are 16 feet tall.
Preparing the site for a show normally requires over a week of construction, a heavy-duty task that includes building an auditorium that can hold 2,500 customers.
“Asia is a new market for us,” says Robert Mckenzie, the troupe’s tour manager. “So far we’ve had shows in Singapore, Hong Kong and Tokyo, and the response has been very promising. It’s a very different culture, and we hope to come back to Seoul with other Cirque du Soleil shows.”