[Book review]A good translation is better than a poor novel

[Book review]A good translation is better than a poor novel 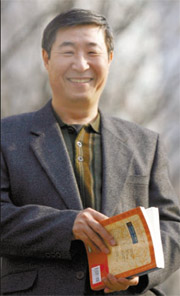 The final volume of “Roman’s Story,” Siono Nanami’s 3-part novel based on the Roman Empire was recently translated into Korean.
The latest episode is called “The End of the Roman World.” Part of the book’s success in Korea, where it has sold over 250,000 copies, is owed to the translator of the book, Kim Seok-hee, who turned the entire series into beautiful Korean. The following is an interview with Mr. Kim.

Q.Did you feel, when you read this book for the first time, that it could be a big success?
A.Honestly I didn’t know if it was going to sell this well. In 1992 when “Roman’s Story” was first published in Japan there were stories about the author, Siono Nanami. But there was a tendency here to look down on the author because she was Japanese, a woman and an amateur writer. In spring 1995 Kim Eon-ho, the president of Hangilsa Publishing, brought the author’s earlier works from Japan and gave them to me, Jeong Do-young and Oh Jeong-hwa ― the translators of Nanami’s previous books. I was the youngest of three and I decided to do it because the author promised that she would write one volume every year for 15 years.

Why do you think the book received such praise in our society?
When the first volume came out globalization was a keyword in Korea. I think the ideas about the world economy, localization and tolerance portrayed in the book were received as a model of globalization’s benefits. The reaction to the book was most enthusiastic in economic circles. I think the desire to have a leader with a genius for creativity who makes people feel safe, made people read it

How did the translation go?
The Japanese publisher is Shinchosha and they never gave me a copy ahead of time. I received the final episode of the book a day after it was released in Japan. Two days before the publication I went through the previous books to get used to the rhythm. I translated everyday for 10 hours a day, for about 20 days. There are cases where you need to preserve the writer’s style, depending on the author, but that’s not really the case with Siono. Her phrases are unsophisticated. It’s almost rough sometimes, so there is a room for translators to fill the gap and make an easy read.

Your first and only novel won a literature award. Do you feel the creative urge while you translate?
My first translation “Hwasando” was published in 1988. Shortly after my novel was selected by Hankuk Ilbo. I used to say that translation is like my wife, and writing novels is like my lover. But it’s not easy doing both. Often I couldn’t meet the deadlines for translation, while I was writing a novel. Since 96 I’ve focused on translation. Now I feel that it’s more meaningful to do a good translation than write a bad novel. That’s given me an excuse to abandon my dreams of writing novels. But I still take notes when there are subjects or scenes I could make into a good novel.