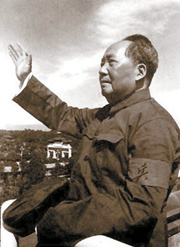 Mao Zedong during the Cultural Revolution in 1966.

Mao Zedong was a megalomanical thug who used torture, intrigue and starvation to service his own lust for power. Today, outside China, it is hard to believe anyone would dispute this description.
But even I, who already believed the above, was not prepared for the full scale of terror and death wrought by Mao as it is described in “Mao: The Unknown Story,” an unflinchingly harsh but studiously researched 2005 biography by the husband and wife team of Jung Chang and Jon Halliday that was recently issued in a new paperback printing.
The book’s premise, though unstated, is simple and convincing: Every myth the Chinese government now perpetuates about Mao is a bold-faced lie, just like almost all the words the man himself uttered in public in his lifetime. Mao was never a true Communist, and those close to him, from lieutenants to Russian handlers, knew it ― Communism was just another tool to advance his ambitions.
Among the book’s boldest accusations: On the Long March that became Communist Party legend, Mao was carried on a bamboo pile, and a battle at Luding Bridge never took place. Mao, Ms. Chang writes, consistently sacrificed his own troops to the enemy if he thought it would help consolidate his personal power ― and he didn’t care to lift a finger against the occupying Japanese.
Mao used intrigue ― prolonging speeches, calling meetings at just the right times ― to rise to power among the elite, but from the time Mao first shanghaied the Red army to become bandits in the Jinggang Mountains, his most faithful tool was the angry mob. He used fear to generate bloodlust, and forced confessions and public torture ensured no one went without the shame of complicity, a weakness Mao always exploited. Ms. Chang makes the case that Mao remained essentially a ruthless bandit king his entire life.
For each victory in Mao's rise to power, Chang and Halliday carefully note the price. During the so-called Great Leap Forward, a national military project, Mao killed close to 38 million people by their count. 22 million starved in 1960 alone, which they call “the largest number in one year in any country in the history of the world.” But these inhuman numbers are surrounded in “The Unknown Story” by very specific, excruciating examples: of women driven mad on Mao’s whim, of peasant men led through the streets with rusty wires through their testicles, of demands that local party cadres deliver more executions and of word that Mao was “pleased” when they did.
Ms. Chang and Mr. Halliday dig deep, into personal papers, family letters and still-secret documents transcribed from memory, and for interviews with survivors from every stage of Mao’s lifelong madness. And their outright hatred of their subject is never concealed. They seize on every scrap to prove the evil in Mao’s soul, and soon they have built an irrefutable mountain of evidence. Notes and bibliographies consume a full 153 pages of the book.
The enthralling style brings the ugly Mao alive, but a steadfast love for China also shines through in affectionate, vivid descriptions of the beauty of the land and the culture ― of Yenan and Luzhan, two of Mao’s key bases, along with Chinese opera and architecture. The seething anger at Mao for tainting and destroying this culture is palpable.
As Ms. Chang depicts in damnable detail, Mao never let anyone around him remain innocent of suffering. He used terror to control the millions among the common population and his closest subordinates alike ― he even dared to manipulate Stalin himself. This was a man who callously bent the world to his will, who said, “Half of China may well have to die.”
This is academic revenge doled out in breathtaking detail. If most history books are written timidly, with anything that can’t be absolutely verified excised, this is history written, one imagines, by a dogged Chinese female Indiana Jones.
One potentially fascinating story left out, however, is how the book itself came to be. Ten years in the making, based on scores of documents and interviews with recalcitrant and sometimes outright hostile subjects, “Mao: The Unknown Story” lacks an introduction to guide readers down this long road ― and to silence doubters. As it stands, this is a deeply moving, frank, meticulous, often nauseating biography of one of human history's greatest monsters. It ought to be required reading for anyone who plans to stand in the shadow of Mao’s portrait, which, as the book points out, still hangs over Tienanmen Square.