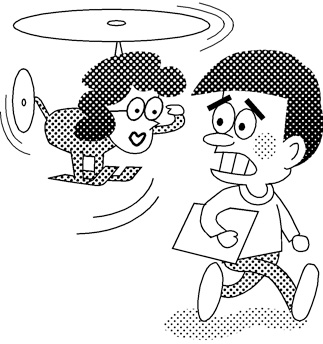 “Helicopter parents” refer to parents who pay extremely close attention to their child or children. In the United States, there are reports that corporations are setting their sights on helicopter parents in order to recruit their talented offspring. It is the global manifestation of the domestic phenomenon of aggressive, dedicated mothers.
In the United States, they refer to children born during the 1980s as “helicopter kids.” Indulged by overprotective parents, they feel they are somehow special. Other reports indicate that narcissism is on the rise compared to previous generations. The “kangaroo generation” refers to children who leech off their parents; children suffering from “Peter Pan syndrome” refuse to grow up; and over-indulged children in China are referred to as “little emperors.” Similar to helicopter kids, all these terms refer to children who are protected and coddled to a degree that threatens their ability to make it in life.
In the Hollywood movie “Hitch,” Will Smith plays a “date doctor” who coaches men on how to woo women. This is not happening just in movies ― businesses that offer date management and referrals are popping up. There is a program on domestic cable television where famous entertainers work as date coaches. The scope goes beyond mere dating; prompted by the general complexity of life, increased competition and an overload of information, so-called “life coaches” that advise on self-improvement, career management, social skills, child education, and financial issues are now offering their services. When looking at the self-improvement books at the top of the bestseller list, they are all coaching books. In the United States, life coaching is a $1 billion industry.
Domestically, education coaches are currently on the rise in the private education market. These coaches do not teach from the textbook, but they organize an overall study program, equipping the student with the appropriate learning methods. They are educational consultants and study managers. Graduates from elite universities and parents who have successfully educated their own children usually step into this market.
Self-learning is already outdated. Children learn at schools and academies; they learn from helicopter parents who are at their beck and call; and if that is not enough, they can entrust their lives to coaches and consultants. It has become the emblem of a turbulent and chaotic society. Self-reliance has vanished; living is impossible without someone managing and directing them ― it is a “coached life.” They are children forever. Are you a helicopter parent?