The beverage with seven stages to heaven

The beverage with seven stages to heaven 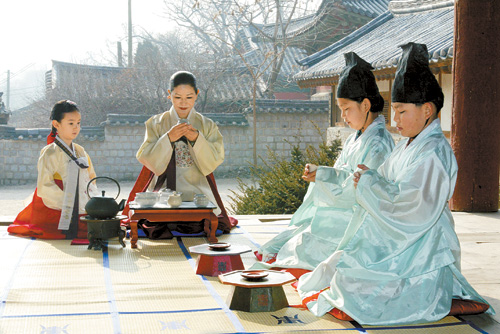 In his book, “Tea Makers,” Choi Seong-min describes the experience of tasting a special cup of green tea. It was made for him by a Buddhist monk in a temple guestroom, during the summer of 1966.
At first, the writer observed that nothing came out of the teapot when the monk leaned its tip on his cup. Then he saw two tiny drops fall.
The monk told him not to swallow them, but to place the liquid on his tongue, calling the drops “hermit tea,” which meant that its purpose was to induce meditation.
As the first drop spread over his tongue, Mr. Choi felt as if “a morning breeze had poured in through both my ears and I was strolling on a forest path, until I slowly disappeared. It left my entire body feeling chilled.”
The pursuit of purity has always connected tea-making and meditation in Buddhist culture, in which the act of producing (or tasting) the highest-quality tea involves strict procedures and extravagant rituals, both physical and spiritual, that correspond to a natural cycle. In Buddhism, tea is akin to a sacrament. 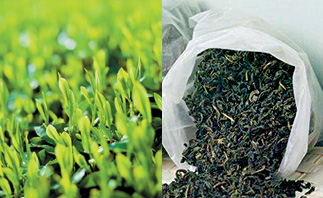 Green tea is almost black when it is picked and turns green as it dries.

The method for preparing hermit tea, for example, requires monks to pick leaves of consistent shapes on a clear day without wind, at around 9 or 10 a.m. Then, once dew has formed on the leaf surfaces, after they have sat on a bamboo platform for a few hours, they must be roasted eight times before noon.
Despite these detailed instructions, veteran tea-makers say that it's ultimately impossible to teach the exact technique of tea-making through words, as it involves an extremely meticulous procedure involving all the senses. They say a similar degree of concentration is required to appreciate tea.
A poet from the Tang Dynasty once wrote that tea should be drunk in seven stages; the first cup gives fragrance; the second eases the hardships of life; the third relieves thirst; the fourth makes one sweat, so one can dispose of life’s disappointing aspects; the fifth makes your skin clear; the sixth leaves the mind pure, and the final cup gives one wings to fly away.
Another poet, also from the Tang Dynasty, wrote that a cup of green tea made from fresh spring water heals chronic illness with the first cup; the second cup heals eye infections; the third cup makes the flesh taut and unwrinkled, and, by the fourth cup, you become enlightened and your body is stronger.
Perhaps because of its spiritual aesthetics, the custom of tea drinking was once considered a luxurious habit for the privileged few. This attitude sometimes leads to an orthodox view of tea, which leads some tea purists to denounce types that exist outside strict ritualistic boundaries.
A good example is apricot flower tea, which is a type of green tea in which drinkers float a flower bud in the hot liquid. The beverage excites tea enthusiasts every spring. They consider apricot flower tea to be an extreme aesthetic pleasure. The heat from the tea forces the bud to open, releasing a strong fragrance of apricot.
This brew is considered frivolous among traditionalists who say it complicates the authentic taste of green tea, by mixing it with the fragrance of a flower. The idea of breaking a flower bud off an apricot tree is also criticized as an act that lacks humility and is disrespectful to nature.
The strict rituals involved in making green tea have been increasingly modified and adapted to fit modern life-styles.
Most coffee chains offer green tea mixed with a whole jumble of other ingredients, producing bastardized beverages like green tea lattes, which traditionalists regard as a sacrilege. Green tea extract is sprinkled on top of crushed ice and red beans to make a dessert, called bingsu, that is popular with young Koreans.
Tea extracts are also used to marinate bacon and other meat to reduce the scent of fat. Eggs from chickens that have been fed a diet rich in green tea extracts can be found in supermarkets, advertised as a health food. 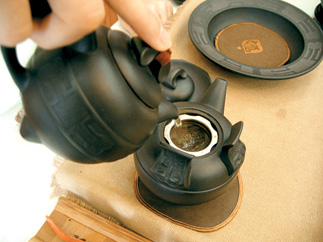 Tea should be poured slowly and savored through meditation.

Aside from food, green tea has been turned into cosmetics, toothpaste, chewing gum and diet products. In fact, green tea is one of the most widely-consumed drinks today along with black and oolong tea.
Ever since the1976 report by Michael Sporn, a cancer specialist at Dartmouth Medical School, which said that green tea helps prevent cancer, medical researchers have found other evidence that green tea may prevent diseases like Alzheimer’s and diabetes, among other ailments.
A recent survey revealed that Koreans drink, on average, 35 grams of tea every year. That’s still a small amount compared to the 3,000 grams of tea drunk in England, which has the highest tea consumption in the world. However, over 760 tons of green tea were produced in Korea last year, which suggests consumption is increasing.
Historically, the earliest record of tea on the Korea peninsula dates back to the 9th century, in which tea was given to King Heungdeuk by emissaries from the Tang dynasty as a gift. Tea ceremonies became common practice among the Goryeo nobility and some Confucian scholars. Tea was used to mark important occasions like birthdays, anniversaries and remembrance days, but the Confucian period in general was one of decline for tea because of its association with Buddhism, which Confucian acolytes despised.
It was during the 1980s that tea culture had a renaissance in Korea. Nationalist students were in the vanguard as they sought ways to revive lost traditions.
Today, the most common type of green tea is jakseolcha, which means “sparrow tongues.” The name derives from the fact the tea is made with the smallest leaves. The smaller the leaves, the more expensive the tea.
Despite its name, fresh green tea should be close to dark ink in color when it is picked. It should gradually turn green as it dries, then to yellow or brown . If the condition of the tea is not apparent from its color, pour hot water over a few of the leaves. If they smell like chaff it means the tea has gone bad.
A good tea should have a little bit of every flavor, in equal measure, from sweet to salty, bitter to sour. The trick of making a good tea is to find the right balance. 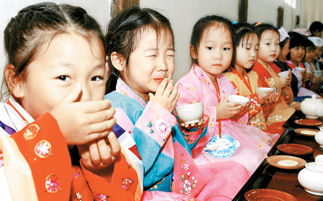 Children are taught tea rituals at a traditional Korean ceremony.

Veteran monks believe that well-made tea brings benefits, but wine brings troubles, as wine excites a person’s spirit while tea is soothing.
But, in the end, the sensual art of tea-making all comes down to one’s state of mind. Veteran tea-makers stress that it’s impossible to make two cups of tea that taste the same, as the taste differs depending on one’s psychological condition and world view at the time.
That perhaps explains a poem by the Venerable Jiheo, who once wrote that “The name of that moon is this tea. The name of this tea is that moon. So a cup of tea is neither this tea nor that moon.”