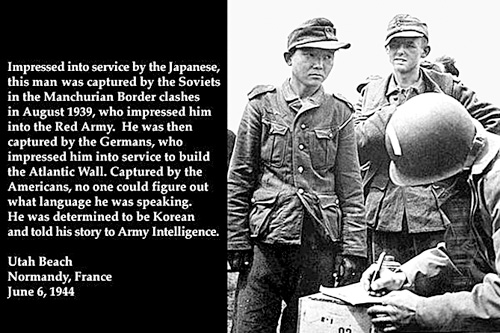 Everything began with a black and white photograph. The man depicted is a Korean, wearing a German military uniform. He had been captured on a French beach, just after the D-day landings. Previously he had fought for the Japanese and the Soviet Red Army. People might wonder how somebody could suffer so many twists of fate, but others see Korea’s history in this one man’s misfortunes.
Author Jo Jung-rae, 63, believes that the life of this unlucky Korean provides a revealing narrative of Korea’s turbulent modern history. So much so that he decided to use the photograph as the basis for his new novel.
The result, “Oh, God,” is a short book but its contents are profound.
In Mr. Jo’s novel, his main character, Shin Gil-man, is drafted by the Japanese army at 20 and stationed in Manchuria. In clashes between the Soviet Union and Japan, he is captured along with other Korean soldiers and becomes a Soviet prisoner of war. He is then made to fight against the Nazis who, in turn, capture him and make him fight the Americans. In the novel, Mr. Shin’s life ends after he is sent back to the Soviet Union, where he is executed by firing squad.
“My novel records inhuman, brutal acts committed by the imperial powers against small, powerless nations,” Mr. Jo said. “I began to question what on earth it means to be human. I wonder whether humane behavior is an impossible dream.”
The powerless nation in the novel is Joseon dynasty-era Korea (1394-1910). The imperial powers are Japan, the Soviet Union, Germany and the United States. For the powerless nations, there were no “good” allied forces. There were only greedy imperial powers. For example, the prisoners of war were often executed when they returned home. Mr. Shin is one of them. According to historians, Stalin purged 10 million people, including 5 million prisoners of war.
“During the Second World war, the Red Army drafted people from Central Asia to the front, including ethnic Koreans. The evidence suggests that 3 million were drafted from the region. They belonged to the No. 795 eastern battalion. I interviewed an ethnic Korean who had belonged to the battalion. He was too young to fight so he worked in the post office and he survived.”
Asked why the novel is titled, “Oh, God,” he said, “I agonized for ages over the title. The title ‘Oh, God’ is a fragment of the sentence ‘Oh, God, how can the world be like this,’ which is a scream of anguish. I am trying to condemn the cruel behavior of human against human, through the title. It took me seven months to come up with it.”
Mr. Jo said the lesson from the tumultuous life of his character is that one must be resolute and try not to repeat the same mistakes. “I hope people read my book and resolve to live fully everyday, have a level head and become more determined,” he said. 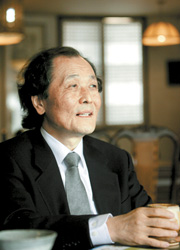