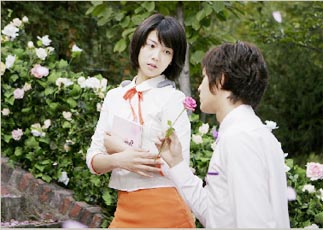 A glimpse of the reactions posted on the Internet regarding “Dasepo Naughty Girl” gives some sense of the film’s status. A user named Hidraqra writes, “it’s the best film I’ve ever seen, but a film I would never want to see twice.” Another writes: “it’s a shame that the film was made in our country.”
But perhaps that’s exactly the response that the director, Lee Jae-yong, was looking for. Mr. Lee, who is known for his stylish, visually-alluring films about sexual taboos, has made a film that is a hard slap in the face of conventional morality, full of puns and visual cues that play with gender stereotypes and cultural taboos.
The film, which was adopted from a Korean internet comic called “Dasepo Naughty Girl,” is set in a high school where the objective is to “have no religion.” It has students and teachers with promiscuous habits who are dismissed after they are found to have sexually transmitted diseases. Sado-masochistic activities are part of the school tradition and characters openly display their sexuality.
The episodes jump from the students’ lives at school to what they do at home, throwing in cute little details like the son and father who encounter each other in an adult chatroom.
The central character of the story is a poor girl, who actually carries around a grey doll called “Poverty” throughout the film. There is also Anthony, a wealthy adoptee from Switzerland on whom the poor girl has crush, but he is infatuated with a transsexual. She is the sister of another character called One Eye, who is partially sighted.
The “poor girl” is eventually forced into prostitution, but all the male clients she meets are soft-hearted middle-aged perverts who, instead of having sex, want to play a video game or share girly-talk in a hotel room while clad in Sailor Moon costumes.
The scenes are bizarre, but they are absurdly funny, often in an intelligent and subversive way.
One of the most delightful segments from the film plays with gender stereotypes, like the gay hoodlum and the transsexual sister of One Eye, who convinces her brother that she should undergo a sex-change operation by saying, “What would you do if you found out that you had the wrong pair of wheels on your bicycle? You’d just change the wheel and keep riding.”
The friendship that develops between the poor girl and the cross-dressing gangster boss, who convinces the girl to “never consider suicide unless you suffer from severe hemorrhoids,” is full of wit and warmth.
At the same time the film is undoubtedly self-conscious, contradicting the refined style and narratives of Mr. Lee’s past films like “Scandal” and “An Affair” in every way. In fact, he made a revealing confession when he said, during a press interview, that he “wished to tell people, for once, that he wanted to make an irresponsible film.”
Many will see “Dasepo Naughty Girl” as an irresponsible film, but in a society that is not accustomed to outre discussions of sexual behavior, it could also be considered a good start.