UCC has to be quick, funny: wave girl says

UCC has to be quick, funny: wave girl says 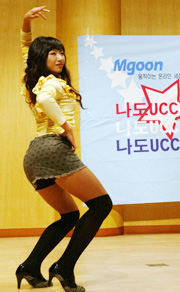 How do you become a popular Web star? Who could answer this question better than someone who has already walked that path?
Answering that question is exactly what 27-year old Yoon Seo-na (real name: Yoon Sun-hwa) did last Friday when she took the microphone at Dongduk Women’s University to give a special lecture on making user-created videos that can “make your dreams come true.”
For Ms. Yoon, standing on stage to address an audience on that topic was in itself a dream for her.
She became famous on the Internet after she posted a few video clips of herself dancing on Mgoon, a Web portal site for user-created content (UCC).
Ms. Yoon’s videos mostly end with “sexy dance” and have received more than 1 million page views, earning her the nickname “wave girl” because she moves her body back and forth like a fluttering ribbon.
In real life, Ms. Yoon runs an Internet shopping site for women’s clothing selling mainly outfits she designed. She began filming videos of herself dancing and uploading them on video portals in January.
“I like clubbing, so my friends took a short video of me dancing. We had no idea it would become this popular,” she said. Not only was Ms. Yoon’s video popular on Mgoon, its title was also featured as the ‘most popular search phrase’ on major Web portals such as Naver.
She was finally invited by Dongduk Women’s University to give a two-hour lecture on how to become a star through user-created content as part of a general elective course on media experience for freshmen studying media design.
Choi Jae-yong, the instructor in charge of the course, said that Ms. Yoon was invited because the influence of user-created content is increasing rapidly. Ms. Yoon’s lecture was videotaped (naturally) and posted on Mgoon for those who could not attend in person. 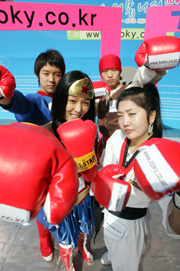 Looky, a recruiting site, is holding a promotional search for Internet stars. [YONHAP]

Ms. Yoon gave several tips on how to make videos that could attract a lot of viewers. “If you want a lot of people to watch your videos, they have to be short and have an eye-catching, strong title,” she said. “You also have to put your funniest or best things at the very beginning because Internet users do not have patience. A last-minute twist is dangerous.”
The entertainment recruiting Web site Looky.co.kr is holding a contest for would-be stars. Cyber celebrity hopefuls can post their video clips to a special section on the Web site.