When air quality makes people ill, who should pay?

When air quality makes people ill, who should pay? 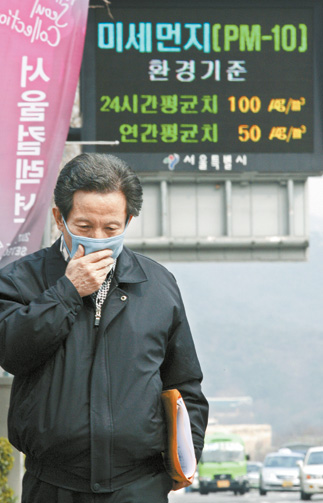 Lee Yun-seob, an asthma sufferer, walking near City Hall. The signboard behind him announces the city’s goal to limit carbon monoxide emission. By Ahn Yoon-soo

It takes a little patience to go for a walk in Seoul with 68-year-old Lee Yun-seob. He makes you wait until he has put on his surgical mask, packed his inhaler and filled little bags with dozens of colorful pills. He takes a step but then stops to pull out a handkerchief and cough up some phlegm.
“I told you,” Mr. Lee said, his voice muffled by the handkerchief over his mouth. “Taking a walk around here is a lot of work for me and an embarrassment for you.”
For five years, Mr. Lee has been suffering from asthma and respiratory infections. But he insists the coughs “just get worse” when he is in Seoul. When he is at his new home, in the pristine rural area of Cheolwon, Gangwon province, he said he “ breathes freely.”
Mr. Lee, who lived and worked in Seoul for many years, believes that the city’s air pollution made him sick and that nobody has tried to curtail pollutants.
Last month, Mr. Lee was one of 23 people with respiratory diseases who filed a suit against five local carmakers and the city government, charging them with causing pollution in the city by neglect of duty. With environmental advocacy groups on their side, they requested 660 million won ($702,546) in compensation for mental and physical damage from Seoul’s air pollution.
Lawyers affiliated with the Korea Environmental Litigation Center said the suit is the first of its kind to be filed in this country. There have been class-action lawsuits filed by apartment complex residents who asked that construction companies compensate them for creating noise or blocking views, but a collective lawsuit against the soaring number of vehicles on the road and growing industrialization is a new development.
“Air pollution never got the attention it deserved,” said Lee Young-kee, a lawyer who represents the 23 plaintiffs. “Even when we knew the cause of the pollution, no one was bold enough to demand a halt because the city had to keep growing.”
“This unprecedented lawsuit is designed to make clear that the city government and carmakers are responsible for the condition of Seoul’s air and we want the public to know more about this issue,” he said.
According to data gathered by Green Korea United, the air pollution level in Seoul is the highest among OECD countries. From 2002 to 2004, the emissions of particulate matter in Seoul averaged 69 micrograms per cubic meter, exceeding the country’s safe limit of 50 micrograms per cubic meter.
The figure is twice the amount of particulate matter emitted in Tokyo and three times that found in New York, London and Paris.
“If this level of pollution continues, we calculate that the average lifespan of a Seoul residents could be shortened by up to three years compared to Tokyo residents,” said Kim Hyuk, of Green Korea United.
The World Health Organization also estimates that air pollution contributes to 800,000 deaths in the world each year. It says that emissions like nitrogen oxide, sulfur dioxide and carbon monoxide cause heart disease and exacerbate asthma.
According to a 2005 study by the Democratic Labor Party, one in four Korean children under four suffer from asthma, while 4.7 percent of the adult population has the condition. It claims the number has been growing since the mid-1980s, when individual car ownership in the city exploded.
But questions remain about whether the Seoul court will approve the plaintiffs’ assertion that the city’s air pollution is the direct cause of their diseases. There was little surprise when a recent class action suit by lung cancer patients against the Korean tobacco industry failed. The court ruled in favor of the cigarette maker, saying there was insufficient evidence that the lung and laryngeal cancers suffered by the plaintiffs were caused solely by smoking.
“I don’t mean to offend lung cancer patients, but air pollution is different. People can opt out of smoking, but they can’t opt out of breathing,” said Han Sung-hyuk, 40, one of the plaintiffs in the asthma case.
He said he was angered by some critics who say that the sufferers were motivated solely by money when they filed their lawsuit.
“Even some of my friends said I would be banging my head against a brick wall by trying to fight these big companies,” he said, standing in the coffee shop that he owns and has filled with plants that can absorb unhealthy fumes. “Some were worried that the lawsuit might give my coffee shop a bad name.”
Carmakers including Hyundai, Kia, GM Daewoo, Ssangyong and Renault Samsung said they are still reviewing the lawsuit and they are not yet ready to make a formal reply. The Seoul city government also said they wanted to approach this issue carefully and needed more time to make a response. But a city official added there were major efforts underway by the authorities to clear the air, such as providing more vehicles powered by cleaner liquid petroleum gas or introducing hybrid-powered cars for public use.
A study issued last December by the Stockholm Environment Institute and the Clean Air Initiative for Asian Cities said Seoul has an “excellent capacity” to manage air quality along with Bangkok, Shanghai, Singapore, Taipei and Tokyo.
“The city is now regulating vehicles with emissions above the safety limits,” said Lee Sun-jae, an official from the city’s Clean Air Department, a new bureau Mayor Oh Se-hoon created after he took office last year. Its goal is to make Seoul air sufficiently clear by 2010 that the sea at Incheon can be seen from Namsan observatory.
But Tae Man-bun, an asthma sufferer in her 60s, said she was not sure she wanted to wait until she can see the Incheon seashore from where she lives.
“My daughter-in-law signed me up for the lawsuit,” she said, explaining that she got some relief from her cough when she went into the countryside. “I’m not a doctor, but I know the condition of my health and it shows that Seoul is not a clean city to live in.”