[Movie review]Audiences will see ‘23’ in their sleep

[Movie review]Audiences will see ‘23’ in their sleep 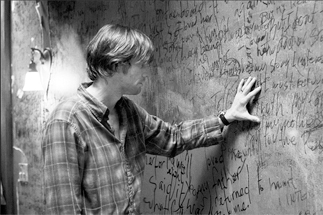 Jim Carrey is not smiling in “The Number 23,” a numerological thriller that all adds up to zero.

The subtle fears that haunt urban dwellers are predictable: patterned shadows on the wall, creepy motels, abandoned insane asylums, falling from buildings, being hit by a bus, paranoid weirdos in dark alleys and prison.
“The Number 23” hits all these notes in swift succession. And though it goes through the motions of being a thriller, it never builds any energy, mostly thanks to the utter absurdity of its premise, which no character ever quite manages to overcome.
In the film, based on the “23 enigma” thought experiment, the number 23 continuously shows up in the life of Walter Sparrow (Jim Carrey) after he reads a book (by “Topsy Kretts”) about how the number turned a detective into a killer. Sparrow finds eerie similarities between himself and the character, eventually adopting the detective’s paranoia.
He starts having nightmares, worries that he may accidentally kill his wife (Virginia Madsen), and ends up a wreck, throwing himself around shouting, “Twenty-three! It’s everywhere!”
No, it doesn’t look better on the big screen. No, the creepy, visceral “boo!” moments don’t make up for it. This is every bit as dumb as it sounds. On the other hand, Jim Carrey will probably one day do a very funny routine mercilessly mocking his involvement in this film.
Director Joel Schumacher has made all the obvious choices. Carrey plays opposite Madsen in both the A plot and in the flashbacks to the novel Walter is reading, which are rendered in a noir style with that Ron Howard halo effect distorting the picture. The film’s assorted nut jobs all react to insanity by writing on walls. Blood appears on people’s hands, knives, corpses, etc. and disappears. And I’m not going to do you the favor of ruining the ending, but yes, it’s exactly what you’re thinking.
The only scary thing about Carrey’s portrayal is how Schumacher has managed to take the irrepressibly whimsical, smarter-than-he-appears star of “Eternal Sunshine of the Spotless Mind” and turn him into an unsympathetic, deadly solemn, slack-jawed wreck spouting truly awful lines while, one imagines, desperately trying not to giggle.
The other characters are similarly one-dimensional, especially the couple’s son (Logan Lerman), who appears to completely lack a will of his own and shows an interest in his father’s rambling purely for the screenwriter’s convenience. Danny Huston hits the spot between reassuring and menacing as a friend of Walter’s wife and possible rival, but it’s a bit part. Even Madsen, who makes the best effort to rise above her role, is forced to endure an inordinate number of genre cliches.
“The Number 23” suffers from too many failed attempts at suspense, an unbearable premise, wooden characters and not enough frights and chills to keep you awake till the end. Though some of the noir shots are well framed, its attempts at philosophizing are shallow and glib.
Out of sheer boredom, I found myself wishing desperately either for some sort of appalling killing spree or for Carrey to crack a smile and reassure me that yes, this is a comedy after all.