Retrospective will explore the films of P.P. Pasolini

Retrospective will explore the films of P.P. Pasolini 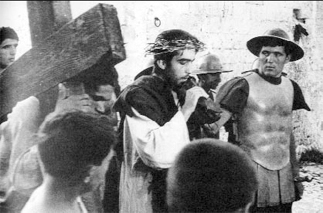 A scene from “The Gospel According to St. Matthew.”

He was a mysterious poet, philosopher, playwright and political columnist. But above all, Pier Paolo Pasolini was one of modern Europe’s most controversial filmmakers.
In fact when “Violence and the Sacred,” a special Pasolini screening, was held in a small alternative theater here for the first time in 2002, the audience response was overwhelming. A follow-up event, “Retrospective on Pier Paolo Pasolini” at the Seoul Arts Center, will screen a series of his features, documentaries and shorts that have rarely been shown in public.
His films revealed the Roman underworld, overlapping violence and reality to create a form of resistance to the ruling powers of his time. His films were deeply political, although he was also praised for the bringing out the “sacred nature” of the world. He challenged conventional morality through films like “Mamma Roma,” which told the story of a prostitute and her son. On the other hand, he shot “The Gospel According to St. Matthew,” a film that’s still considered one of the best cinematic adaptations of Jesus’ life, depicting the son of God from what Pasolini said was “a believer’s point of view.”
His own life was as eventful as his works. Born to a Fascist father, he was drafted to fight in World War II and became a German prisoner of war. He managed to escape, and later joined the Communist party, but was thrown out for “moral and political unworthiness” after he was found to be gay.
He was murdered on November 2, 1975 on the Ostia beach near Rome, run over with his own car. Disputes continue to this day about who killed Pasolini. The official record says he was killed by an extortionist, while others speculate that his murder was commissioned for political reasons. The filmmaker himself told another that he would be killed by the Mafia shortly before he died.


There will be a series of lectures on Pasolini during the retrospective. The films to be screened include “Days of Sodom,” “Arabian Nights” and “Mamma Roma.” The retrospective runs from April 4 to April 29. Call (02) 741-9782.