The show goes on for pop star turned dancer

The show goes on for pop star turned dancer 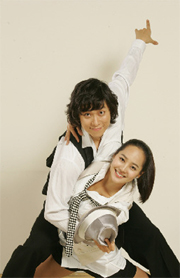 Will she be dancing or not?
After Eugene (Kim Eu-gene), an original member of the dance trio S.E.S., fractured a rib during practice, no one knew whether she would be able to do her new Latin spins on stage during the Korean musical “Dancing Princess.”
But there is no need for worry, the spokesperson for Culture Cap Media said Wednesday, adding that the pop singer would only delay her musical debut by a few days.
She was initially planning to take the stage tomorrow night, but instead she will appear starting April 4.
Until then, Yang So-min, with whom she shares the role, will appear in every performance.
“Dancing Princess,” adapted from a 2005 film of the same name, is about an ethnic Korean girl, Cha-ryn, from a rural part of China, who gets involved in a sham marriage.
Her fake husband is a modern dance performer getting ready for an important dance competition.
Eventually, she learns to dance with him and becomes his new partner. Eugene will be playing Cha-ryn, a role that demands a vigorous combination of modern, jive and samba dances.
The musical composers for “Dancing Princess” include film music maker Choi Man-sik from “Friend” and “The Contact,” Seo Sang-eun from the musical “Waikiki Brothers” and Kim Dong-gi from the movie “Samgeori Theater.”
“This musical has over 40 numbers full of song and dance,” said Kim Kyung from Culture Cap Media. “We eliminated the talking parts as much as possible and instead emphasized fast-moving bodies.”
According to the producers, actors and actresses practiced up to 12 hours a day for three months to learn the steps. Six professional modern dance performers coached the actors.
“I saw Eugene stay after practice until 2 or 3 in the morning practicing her steps,” Lee Geon-guk, one of the choreographers, said.
The actress was injured while rehearsing the competition-day scene, which requires a series of high-impact movements.
“I had a few minor injuries before, but the pain became unbearable during the competition scene,” the pop idol said.
The original movie by director Park Young-hoon attracted over 2.2 million viewers when it opened in theaters nationwide. It starred teenage star Moon Geun-young as Cha-ryn.