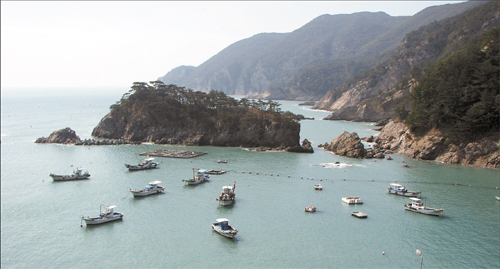 The view from the cliff where Joseon Dynasty scholar Jeon Yak-jeon liked to come during his exile on Heuksan Island. He created the first Korean marine encyclopedia here. By Lee Min-a

MOKPO, South Jeolla ― I never thought I would sympathize with the “Girl from Heuksan Island. “
The Korean “queen of elegy,” Lee Mi-ja, made the girl famous in the 1960s, singing of how she pined for her lover, and watched the island’s “waves surging in, ten thousands times” until her heart turned black with sorrow. Heuksan means “black mountain,” although the name is probably derived from the dark forests that cover its hills, rather then the emotional condition of its sorrowful female inhabitant.
I felt like the girl from Heuksan the night before I arrived, since the last train from Seoul to the country’s southwest corner had dropped me off in Mokpo after midnight. There were six hours to go before the island’s ferry would leave Mokpo harbor. All I could do was check into a motel, where I found sleep impossible. I watched the dark water turn blue as dawn broke and I tried to imagine how the girl from the song really felt.
“The girl in the song still lives today, you know,” said Seo Jeong-pyo, the taxi driver I hired at Heuksan Island’s Yeri harbor. He winked at me in his rear view mirror. I was still trying to recover from the two-hour voyage from Mokpo as I listened to him. The sea had been choppy and my legs still felt like rubber.
Although there are 13 hamlets in the Heuksan district, local officials recognize only 12, because the last one is occupied by a single house near the shore.
“Everyone knows that a virgin in her 60s lives there alone and she won’t let the officials finish the road across her land,” said the driver, and, as he finished speaking, the paved road underneath the vehicle suddenly turned into a rocky surface. 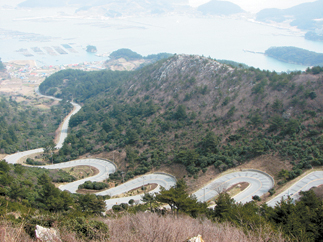 The Dragon Trail (Yong Gogae) with 12 curves leads to the top of Sangnabong Peak. On a clear day, nearby Hongdo island is visible. By Lee Min-a

“This is the part,” he said, grinning.
The officials had to leave this section unpaved when they were building the 27-kilometer-long circular highway around the island, he said. Only 24 kilometers of it is paved at the moment.
“Who knows, she might want to preserve the place until her love comes back,” he said.
I could not confirm Mr. Seo’s story, but this island had plenty of interesting tales for a lone traveler to relish. Some of them were quite melancholy, reflecting the island’s sad history.
The first inhabitants arrived in the 9th century, during the Silla dynasty, when Jang Bo-go used the island for trade with Tang dynasty China. During the Joseon dynasty, the island was used as a place of exile, because of its distance from the mainland and the rocky waters that surround it, which make it hard for people to come and go. The Roman Catholic biologist Jeong Yak-jeon (1758-1816) was one of those banished here by King Jeongjo’s minions. During his 13-year exile he completed Korea’s first marine encyclopedia.
One of the biggest attractions on the island is an eerie tree in Jilli hamlet that is sacred to a tutelary deity. A virgin spirit, who supposedly still lives in the tree, fell in love with a flute-playing young sailor who visited the island. The spirit would not let him go. She whipped up a storm so his boat could not sail. The villagers were afraid of making the spirit angry, so they persuaded the flautist’s shipmates to leave without him. After their departure, the young man felt so betrayed and that he died of grief. At the beginning of the year, the townspeople hold a traditional ritual to placate the virgin spirit and commemorate the sailor.
As we passed the tree Mr. Seo assured me the story was just a fable, but then he added the townspeople were scared of the virgin spirit because many virgins were thrown into the sea in ancient times as a sacrifice to the sea god.
I left Mr. Seo and climbed Mount Sangnabong for the island’s best view of the indigo blue sea. It was a muggy day, but neighboring islands were still visible through the fog. On the peak, there is a monument to “The Girl from Heuksan Island.”
“The song made the island so famous,” Mr. Seo said when I returned. “It is everyone’s wish that Lee Mi-ja visit one day and give us a concert.” 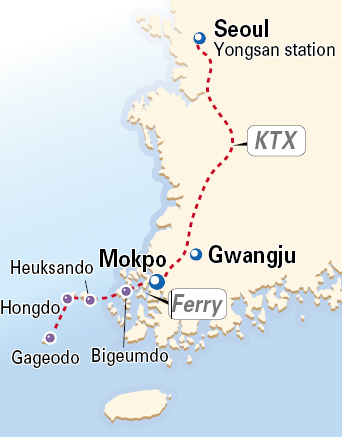