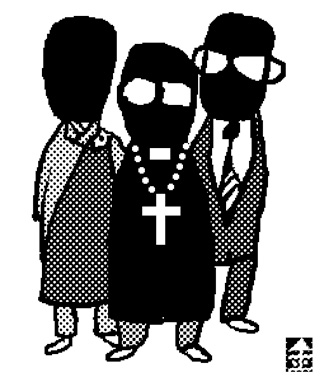 On Oct. 5, 1987 Kim Young-sam and Kim Dae-jung visited the National Alliance for Democracy and Reunification of Korea or the NADRK (headed by Reverend Moon Ik-hwan.) They were interviewing for the presidency; after the announcement of direct presidential elections, they both adamantly declared their desire to become presidential candidates. They looked to the NADRK to decide.
At the time, the NADRK opened an executive committee meeting and decided to back Kim Dae-jung, which prompted affiliated groups to fire back: “Our objective was to bring an end to military rule, not to support a specific candidate.” They had decided to back Kim Dae-Jung based on his policies. Religious groups also followed suit in supporting Kim Dae-jung. After that, many figures, including Lee Hae-chan (former prime minister) and Lim Chae-jung (National Assembly speaker) from the NADRK joined Kim Dae-jung’s Peace and Democracy Party. As expected, this did not sit well with Kim Young-sam. The effects were profound and lingered a long time. The opposition groups divided into three factions without any ethical justification. Regionalism established itself as the most important variable in Korean politics.
Recently, some religious figures have declared they will produce a presidential candidate for the overall pro-government force. They say they will push through a “consolidated round-table.” King Arthur used the roundtable to prevent bickering and power struggles between his knights. Religious groups seem bent on introducing their candidate into the political arena, implying that the will of God supersedes the will of the people or the party.
Religion infusing itself into politics has always been a problem. Just as in the Humiliation at Canossa when Henri IV was made to wait in the snow for three days before Pope Gregory VII would grant him an audience or priests armed with liberation theology, the debate over separation of church and state has continued throughout history. Separation of church and state has been the principle unless referring to a theocratic government. However, universal characteristics in religion that curb corruption and persecution, despotism and intolerance permeate the state, as well.
Times have changed since 1987 when considering the role of religion. There are no worries that an oppressive military government that seized power through force will continue ― freedom of speech is alive and well. Perhaps people want something different from these religious groups.

The writer is an editorial writer of
the JoongAng Ilbo