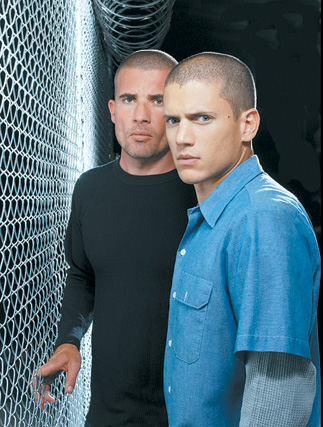 There were around 500 women around the Shilla Hotel, northern Seoul, screaming “Welcome Sukhopil! We love you,” at 11 a.m. last Friday. The occasion was a fan meeting with Wentworth Miller, the actor who plays the lead character, Michael Scofield, in the American drama “Prison Break.” Around 100 people who didn’t have tickets stomped their feet waiting for a glimpse of the actor with placards in their hands. Some among these adoring fans slept in the streets near the hotel. “Sukhopil” is the Korean pronunciation of Scofield, Miller’s character’s name, which has become his nickname among Korean fans. Scenes like this show just how popular American dramas are becoming in Korea among twenty- to thirty-somethings.
“Prison Break” is a popular drama that was launched in August 2005 on the Fox network. The story centers around Michael Scofield, the genius younger brother of Lincoln Burrows (Dominic Purcell). Scofield attempts a bank robbery so he can get thrown in jail to help his brother, whom he thinks was wrongly convicted of murdering the vice president’s brother.
Word of the well-crafted plot and charming lead actor started spreading through the Internet, successfully making the series one of the most watched American dramas in Korea. There are over 60 Internet fan cafes with around 200,000 members devoted to the drama and its characters. These numbers are almost on par with the fan base for local celebrities. Won Jong-woon, an executive at Cheil Industries who scouted Miller to appear in their television advertisement for Bean Pole (a clothing brand) said, “We have used superstars such as Gwyneth Paltrow and Daniel Henney but decided to hire Miller because he has had such a big impact on the Korean audience.”
The rise in popularity of American dramas has made a huge difference in the TV drama genre in Korea. First of all, people started accessing these dramas through the Internet instead of seeing them on television. Secondly, cable television is now leading the drama trend. Network television has started airing dramas that gained popularity on cable TV, such as “Friends,” “Sex and the City” and “Desperate Housewives.” The days are gone when network television set the standard for trendy dramas.
As a result, people in their twenties and thirties, who were getting tired of the formulaic plot lines of traditional TV dramas, got to see programs they were unfamiliar with. Jung In-ju, a 31-year-old office worker comments, “I’ve never been a fan of dramas. but these days, after work, I always watch the American dramas airing on cable TV.”
Industry experts say that this American drama trend is the result of viewers getting tired of the same old plot line that Korean dramas use, mostly involving adultery and love triangles. However, these American dramas have made a splash with their rich structure and innovative plot lines. With this threat hanging over the shoulders of network executives, Korean dramas have started to change. Local dramas such as “White Tower” and “Doctor Bong” have become hits using a new kind of story line, new characters and new subjects such as detectives, marketing experts or secret service agents. 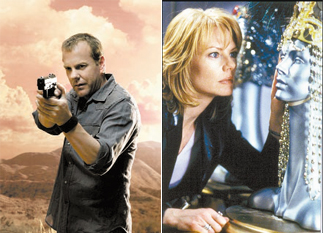 There are experts, however, who say that this will not be enough to beat American dramas altogether. On average, the budget per episode for a Hollywood drama is 2.5 billion to 3 billion won ($2.7 million to $3.2 million), in comparison to the 80 million to 200 million won spent per episode to make Korean dramas, which have two or three writers working on the script. In addition to the rising cost of hiring superstars to give performances in these Korean dramas, the Korean drama industry is on a downhill slide according to many experts.
Kim Seung-su, the secretary general at the Korean drama association, CODA, said: “At present, the Korean drama industry is facing a big change. There needs to be less dependency on a superstar and more emphasis on making a full, interesting drama.”