Classically trained singers break out to become the next Korean wave

Classically trained singers break out to become the next Korean wave 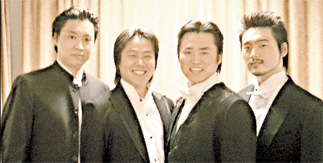 Young Korean male vocalists are raking in awards at international competitions. At the Maria Callas International Competition, Moon Jung-hyun won second prize in the opera category for men (there was no grand prize awarded). Third place was awarded to Yang Tae-joong, and fourth place went to both Heo Jong-hoon and Lee Eung-kwang. The competition this year was literally a battle between Koreans.
Yang commented, “The judges even joked that they should make a special ‘Korean prize.’”
Besides this competition, at major international classical music competitions, Koreans seem to be capturing the spotlight. In January, at the international competition in Barcelona, five of the top 10 male vocalists were Korean. Jung Dong-hyo, one of the five, said, “I didn’t receive a grand prize but the judges have said that Koreans have accurate, clear pronunciation.”
Experts say that a good sense of tone and a fast-working brain are part of the reason Koreans are so successful at these competitions. Jang Il-bum, music critic, said, “Korean vocalists, compared to those from other Asian countries, are fast adapters to different languages and cultures. For this reason, they are welcomed on European stages.” One example is Korean vocalist Jo Sumi, who is esteemed for having perfect pronunciation in different languages, including Italian, German, Spanish and French.
Another success factor is having a good physique. Kim Sung-gil, a music professor at Seoul National University who coached Moon Jung-hyun said, “One strength Koreans have is a clear voice coming from a tall physique.” Moon, who stands at 183 centimeters, is said to have a steady pitch, even during the high notes.
Kim Wu-gyeong, who is a part of Germany’s oldest opera company, the Semper Opera House in Dresden, said, “I need at least six T-shirts a day because of all the sweat after practicing for hours.”
This kind of diligence and discipline is another reason behind their success. Tenor Ryu Jung-pil, who is busy with concerts in Spain and Korea, said, “Because of Korean music students, the music schools all over the world are still lit throughout the evenings.” Moon described his daily schedule and said, “I record my daily performances and would check to see if there were things I did not like.”
Finally, a common love of music and singing, as well as the rise in the number of music students nationwide, are all a part of this phenomenon. Lee Eung-kwang said, “Half of the people who applied to get into the Hanns Eisler Academy of Music in Berlin were Korean.” He added, “Although there is negative feedback from this, I think this steady flow of talented musicians is good for the music community.”
Han Jung-ho, a music columnist, said, “Because there is more interaction with the international community, more and more young musicians are going abroad and getting attention.”