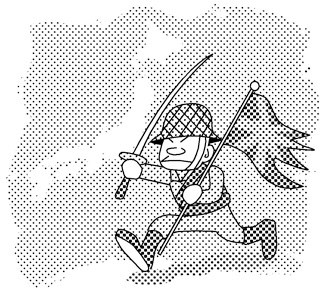 The expression “typhoon of steel” was first coined to describe the gruesome and intense Battle of Okinawa that took place at the end of the World War II. For three months straight, the U.S. forces poured some 80,000 shells, 390,000 grenades and 30 million bullets into the small island populated by some 450,000 people. Some 12,000 U.S. soldiers and 65,000 Japanese soldiers were killed in a battle that also took the lives of at least 94,000 civilians.
The severe civilian loss was caused in great part by the Japanese military’s strategy of mobilizing the people to fight “honorably” until their deaths. This desperate strategy came from its intention to delay the U.S. advance onto the Japanese mainland if only for a day.
The biggest tragedy of the battle was the mass suicides. At the time, not only the Japanese soldiers, but also the civilians were told that it was unthinkable to surrender to the enemy. Even the general population at the time was brainwashed in the militarist tradition that it was the duty of the Emperor’s subjects to take their own lives rather than surrender. Those who managed to survive in the battlefield were given two grenades, one to throw at the Americans and the other to use for suicide when it was all over.
Research conducted by Okinawa prefecture showed that there were at least seven places in which groups ranging from ten to 300 people committed suicide together. For the last 60 years, the people of Okinawa have consistently stated in their testimonies and research findings that in certain places, the suicides were commanded directly by military officers.
And yet, starting next year, any mention of the Imperial military’s enforcement of mass suicides will have disappeared from the history books. The Japanese government on Friday ordered changes to seven history textbooks describing how the army forced civilians to commit mass suicide. “There are testimonies [claiming military enforcement] but there are also divergent views of whether or not the suicides were ordered by the army, and no proof to say the army was responsible,” said an Education Ministry official.
This is an answer we’ve heard many times before. It is, in fact, very similar to Prime Minister Shinzo Abe’s denial of the military’s role in mobilizing wartime sex slaves, saying that there were “testimonies but no official proof.” It is hardly a coincidence that these changes were ordered after several rightist figures started targeting the issue of “mass suicide” in 2005. First the wartime brothels and now the mass suicides in Okinawa, what will “not happen” in Japanese history next?