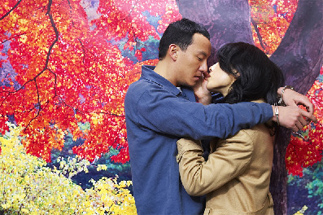 On stage, there was a beautiful actress, a handsome actor and a new face to the big screen.
But all eyes were on director Kim Ki-duk, who sat quietly Friday during the screening of his new film, “Breath.” Kim decided to open the screening and chat with reporters who have been critical of his work. Kim was back after abruptly calling it quits last summer. At the time, he expressed huge disappointment with domestic audiences (and the press) who he said don’t understand his idiosyncratic cinematic world. He criticized the virtual monopoly that Bong Joon-ho’s movie “The Host” held in theaters, which upset fans of the mutant monster movie.
Kim went on, sarcastically calling his own work “mere garbage” and declaring that it will no longer be released in Korea. Despite the international acclaim his movies have received, he has often been criticized for his cruel depiction of women. Kim made it clear that he did not appreciate local feedback either.
“But don’t expect to hear any more surprise comments from the director today,” said Cho Sung-gyu, head of Sponge and co-producer of Kim’s new film. “Please ask only about the film.”
Kim sat with a cap pulled low over his face, but he did not wear the usual sunglasses or the grim face he usually makes when responding to criticism. He looked much softer and smiled, nodded to acknowledge each question directed to him. He apologized if he offended a questioner and remembered to say “thank you” after each question.
“I actually have plans to make at least 10 more films I have in my head so far,” Kim said. “I think I can make a blockbuster with 1 billion won ($1 million) and I have the confidence to make it better than a 10 billion won blockbuster.
“I want to finish them [my movies], and if people who have been helping me stay on my side, I think it’s possible. 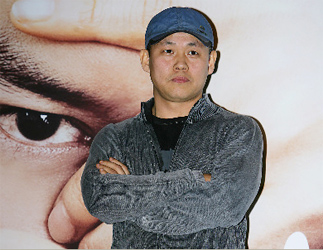 Kim Ki-duk, waiting for questions from the domestic press, who have in the past been critical of his work. [YONHAP]

“I know, I, Kim Ki-duk, am a director who carries lots of baggage, but I thought a lot about my past [behavior] before I came to meet you,” he said. “Maybe my interest toward the world, the energy, the enthusiasm has diminished [compared to the past]. I think I am just less greedy now.”
He also used a touch of humor to lighten the fact that his films have a limited Korean market, which can make it hard to find actors.
“There are plenty of famous foreign actors and actresses out there who want to participate in my future films,” he said with a grin.
Toward the end of his talk, he finally expressed what he felt about last year’s incident.
“I said that [last year] because I had lost hope that the Korean audience would be able to enjoy various genres in theaters,” he said.
“Breath” is Kim’s 14th film. Like his previous ones, it was made with a small budget. This time he spent 370 million won. The movie is about a relationship between a married woman and a man on death row. Chang Chen, a Taiwanese actor from “Crouching Tiger, Hidden Dragon,” plays the convict.
The film is yet to be released in Korea, but Kim sold it to a French distributor, ARP, according to the Seoul-based film marketer CineClick Asia. It is also seen as a likely candidate for screening at the Cannes Film Festival.