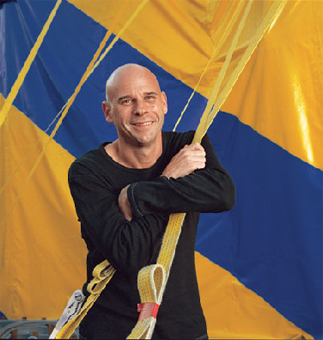 In 1984 Guy Laliberte, then a young accordion player and acrobat based in Quebec, Canada, gathered a few friends to form a circus troupe with the hope of putting on a street performance. Now 48, Laliberte is the founder and chief executive officer of Cirque du Soleil, one of the world’s most successful entertainment companies. The troupe is visiting Korea for the first time with “Quidam,” a multimedia circus show that opened Thursday. The JoongAng Ilbo recently had an interview with the veteran leader of the group. 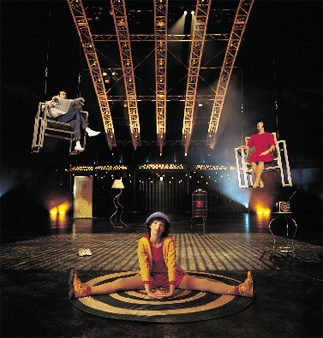 A scene from Cirque du Soleil’s performance in Seoul. Provided by the organizer

Q. What is unique about “Quidam” and what is the idea behind the performance?
A.“Quidam” was a show that was conceived toward the end of the ’90s. Our creative director, Franco Dragone, was trying to imagine what the world might look like in the future. He tells his story through the eyes of a little girl who is looking to connect with herself, her family and society.
The story is told through a combination of amazing acrobatics, dance, live music and singing, in a form that combines several different art forms. Cirque du Soleil has reinvented the idea of what a circus can be, so I believe that Korean audiences will be in store for a unique experience that will excite them and move them emotionally.

Let’s go back to 20 years ago. What motivated you to begin Cirque du Soleil? Did you envision developing the circus into one of the most successful performing arts businesses in history from the very beginning?
My background is street performance, and when I was young, I imagined that I could create a new art form that had all the spectacular elements of the circus the acrobatics, the clowns, the ambiance of the big top and combine it with dance, original music and the theatricality of a play. My colleagues and I created a newer, more modern type of circus that has played to over 50 million fans since 1984. My vision was to modernize the traditional circus by making it more artistic.

You are an artist. However, now you are one of the world’s top business people in the performing arts industry. At a glance, art and business seem like two different worlds. Did you have secret assets that worked as a base for your business success? For instance, was your father a success in business or did you have some other mentor?
I was very influenced by both my father and my mother. He was a successful businessman, and my mother was a nurse. I always believed that art and business could be combined successfully. By focusing on the art and creating shows that connect emotionally with the audience, I believed that people would be willing to buy enough tickets to allow me to re-invest the money in art and create new shows.

It is a custom in the industry to license the performance once it becomes successful. However, Cirque du Soleil is famous for not being duplicated. Why do you follow such a policy? Do you plan to continue it?
I believe very much in the uniqueness of every one of my shows. Each show is created by a creative team that explores different themes. It is important for me to know that when “Quidam” plays in Seoul in the spring of 2007, it is the only place in the world where one can see the show. I believe that not duplicating our shows makes us unique and different from other performance companies.

Cirque du Soleil is a prime example of the so called “Blue Ocean Strategy” in Korea. [‘Blue Ocean’ refers to the business strategy of finding market demands that have been untapped.] Was there careful planning from the establishment of Cirque du Soleil to create a “Blue Ocean?”
Cirque du Soleil was created by stretching the boundaries of an industry that already existed. We were inspired by some of the spectacular elements of the circus and we decided to go beyond the traditional circus by introducing elements from other art forms. In doing so, we created a “Blue Ocean” of uncontested market space.

If you have one, could you share with us who your business or artistic icon is, and also explain why the person is your icon?
My mentor in the world of business was P.T. Barnum. He created the traditional circus in America but also was an excellent marketer. Whenever Barnum and Bailey’s circus came to town, he made it into an event by creating parades with the exotic animals that were in his circus. Everybody knew that the circus was in town and this created great publicity for the show.
Next year, resident shows of Cirque du Soleil will open in Macau and Japan. Could you brief us about the shows and your vision for market expansion in Asia?
Asia is a very important market for us. The two shows set to open in 2008 will be the first Cirque du Soleil resident shows outside of the United States. I believe that Cirque’s growth in the next 10 years will come primarily from Asia. There is a great circus tradition in Asia and we wish to expose this market to our form of entertainment.

Have you been in Korea before? Could you share with us what you know about Korea? (For example, do you know any Korean actors, artists, politicians, or even a sports player?) Does the upcoming “Quidam” in Korea have special meaning to Cirque du Soleil?
Like many people, we have been watching the development of Korea in the area of live entertainment for the past five years. We are very impressed with the growing sophistication of the Korean market and we are very happy to present “Quidam” for the first time in Seoul. Koreans travel abroad and have seen our shows around the world, but this is the first time that they will be able to see a show in their own country. We are extremely excited, and I hope that we can connect emotionally with the Korean audience though the magic of “Quidam.”