The intense pressure of being a mother

The intense pressure of being a mother

Like any young mother, Hahn So-young, 34, wanted everything to be perfect when her son, Sang-hyeok, started elementary school last month.
Every morning, before she went to work, she watched him run into the school playground. She felt an enormous sense of pride. But one day recently he came home with news that broke her heart. Trying not to cry, he asked why she wasn’t at the school like “all the other mothers,” passing out lunch to first graders.
“I think my kid was sad that I could not show up regularly like his friends’ mothers,” Hahn said, explaining that she does not leave work until the late afternoon. She has been thinking of sending her son’s grandmother to do lunch duty.
Volunteer shifts during the school lunchtime have become a habitual practice among mothers of first grade children in most elementary schools. Some schools say they started the practice to reassure mothers. By inviting them to school so they could inspect and serve food to their children they hoped to calm fears after several alarming cases of food poisoning.
But now some parents say the schools have been putting pressure on mothers to come and work. Some feel they cannot refuse for fear that their child will suffer a disadvantage in overcrowded classrooms where teachers can choose, often in subtle ways, who gets the most attention. It is not clear whether an actual disadvantage occurs, but mothers say it is hard to turn down the proposal when it arrives on their doorstep.
“I received a letter at the beginning of the year. It asked several questions, including whether I was available for the year to do lunch service,” said Cho Joo-eun, a mother of two elementary school children. “Not many mothers are brave enough to refuse.”
She explained that the mothers feel, or have been made to feel, that a refusal to serve is seen as a signal that they do not have the time to go to the school. “It’s telling the teacher that you are not interested in meeting them in person,” she said. “You will be seen as a mother who has no interest in her child and mothers fear that will mean their child is left out of some class activities.”
A piano teacher and the mother of a first grader from the Gangseo district said she currently pays another piano teacher to substitute for her, so that she can go to her son’s school during lunchtime to serve food to the children.
“I didn’t want my son to feel left out and I heard that non-working mothers started to complain that working mothers were not part of the volunteer work,” she said, requesting anonymity.
As if to confirm the fears of other working mothers, the piano teacher added that she thought her decision was a good one because now she was able to hear news and information about the school that might not be disseminated to those who did not help at lunchtime. 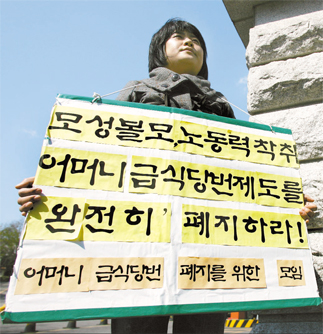 Yoon Jeong-hui, a supporter of the mothers’ group, outside Seoul Metropolitan Office of Education. Her placard tells passers-by that the group opposes the exploitation of mothers through preying on their maternal instincts. By Kang Uk-hyun

Another mother, who only gave her family name, Yoon, said she considered the lunch shift a crucial part of interacting with the teachers who look after her first grade child all day. She said she also joined the school’s Mother Association after finding out that there were some posts left open for parent volunteers. However, she conceded that the work was a stressful burden because she is expected “go to school twice a month to sweep the classroom,” for “the sake of my child’s study environment.”
A teacher from the Guro district said she understood that busy parents cannot come to help, but she also felt parents had to do their part.
“In the past there was much more work [for students and parents to do],” she said, requesting anonymity. “But we have janitors now for restroom cleaning. It would be best if we could hire some people to do the work, but schools have small budgets and someone has to do it, don’t you think?”
“Besides it makes some mothers feel better if they can come here and watch their children,” she said.
That may be true, but a 35-year-old mother from the Dongjak district was disturbed when she learned the list of things she had to do. From a recent school meeting to mark the beginning of the school year, the list of “volunteer organizations” she was expected to join included the Mother Association, Green Mother Association, Library Helpers, Mini-Olympic Organizer, After-School Etiquette Class and Cafeteria Inspectors. At least 15 mothers from each classroom were needed to maintain a shift system that provided school crossing guards, classroom cleanups and the organization of upcoming outdoor physical education events. Some schools also ran an “honorary test superintendent” system, to employ mothers as a daily superintendent for free. Such programs are currently recommended by the Seoul Metropolitan Office of Education as a way to provide mothers with a chance to have more interaction with their children.
Cho, who is also a doctorate student in the women’s study program at Ewha Womans University, insists some of the school’s good intentions were being misused as a tool to exploit the labor of young, anxious mothers.
“Sometimes I pay my mother-in-law 20,000 won to go in place of me, but I realized that there were many working moms, particularly the single mothers, who are not able to this,” she said. “Twenty thousand won is similar to what many young mothers earn daily. This needs to stop.”
To start with, Cho is currently running a campaign on the Daum portal called “Mom Cry” to end the cafeteria volunteer shifts. Every Friday, she and other mothers take turns standing in front of the Seoul Metropolitan Office of Education building. They stage one-woman demonstrations holding up picket signs.
“Most schools in Seoul don’t have a cafeteria, so mothers stand in the corridors and serve food,” Cho said.
A parent association called Chamgyoyuk, or True Education, went further by holding a press conference last month, claiming that some parent and teacher meetings were used as a means to demand and deliver bribes.
“We believe that over 72 percent of the forced bribery occurred during March and April, with teachers saying that they needed the money to run volunteer organizations, equip the classrooms with air conditioning or provide snacks for children,” said Jeon Eun-ja, a head of a regional branch of Chamgyoyuk. “We are watching out for any more cases like this and will ask the Education Ministry to start a thorough investigation of these schools.”
Experts say that the practice of parents doing volunteer work at school may have some undesirable aspects but that’s because the system has yet to settle down.
“Parent-Teacher Association meetings are very common in the United States,” said Cho Joo-yun, an education studies professor from Seoul National University of Education. “Korean mothers tend to view volunteer work in schools as a sacrifice, so it is not easy to persuade them to come to school.”
But Kim Do-ki, a professor from the Korea National University of Education, disagreed, pointing out that parental organizations in the United States have the authority to make suggestions in school meetings, while Korean schools expect only sacrifice from parents and manipulate them by making appeals to maternal love.
“Korean parent groups should change and demand more control of the schools,” Kim said.