Women who love women feel they are hated by the media

Women who love women feel they are hated by the media 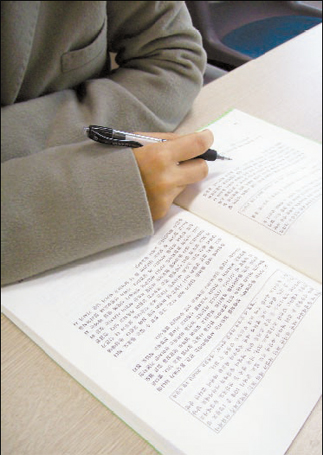 A copy of `Lesbians, Rip the Newspapers,’ a study by a lesbian advocacy group.Provided by Lesbian Counseling Center

No real names were revealed. No photographs were allowed. But plenty of time was spent criticizing the press during an session hosted by a lesbian advocacy group. Their aim was to expose what they see as a society that condemns homosexuality and suppresses female sexuality.
In a meeting simply called the “L” forum, according to a piece of paper posted on the closed door of a seminar room at the Seoul Women’s Plaza building last Friday, a group of lesbian advocates and their supporters produced a 50-page booklet. It was compiled by studying the local media’s portayal of lesbians. It was entitled, “Lesbians, Rip the Newspapers.”
“We have been shocked and hurt by the stereotypes of lesbians perpetuated by the media,” said a woman calling herself Gori, one of the speakers on the panel. “And we came here to tell you that the information conveyed by some of the news outlets is wrong.”
With help from the Lesbian Counseling Center, Gori said she found that news stories from 10 national Korean-language newspapers often misled readers with stereotypes about lesbians and women.
“Lesbians do not spread AIDS,” she said. “Women do not turn into lesbians after being molested by a male, nor do they ‘fall into’ lesbianism at early age bcause they hung around with juvenile delinquents,” she said.
According to a study conducted by Gori’s group from Jan. 1 to Oct. 31 last year, 35 percent of the stories that mentioned lesbians displayed personal hatred toward them, 20 percent used lesbianism as a tool to make a story suggestive, and 19 percent made selective use of quotes from lesbians to exaggerate a story. Some reporters used lesbianism solely as a means to create “a cool urban news item.”
Members of the group shared some examples they had experienced.
“I agreed to an interview and I found out that an irrelevant photo ― but a very suggestive one ― had been printed next to my story,” said Tesory, another member of the panel.
She said she also remembered reading a review of a translated foreign book written by a Korean reporter.
“The last line said, ‘This book is about a lesbian in a foreign country, but it is possible for a normal Korean person to read it without feeling too disturbed,’” she said.
“I don’t think the reporter would have written that if she thought a lesbian might have been reading her piece,” she said.
The group offered an example of a good article that did not display any biases. It was a story about a college homosexual club starting a newspaper of its own. The article was praised for being simple and sticking to the facts.
Most listeners sympathized with the direction taken by the group’s analysis, but some questioned why Korean lesbians were still so hostile, when they claim that all they want is better understanding from society.
Gori replied that the more they talked to the media the more they felt like they were on the wrong end of a backlash, and for that reason they believe they cannot trust the media to be truthful.
“I think that the media and us [lesbians] still have a long way to go before we can shake hands,” she said. “But we wanted to let you know that we get hurt reading your articles.”
“It was certainly a discussion that no reporter would want to sit through,” said Cho-Yi Yeo-wool, chief editor of Ilda, a women’s advocate news magazine, who participated in the forum. “It’s a sad situation. These girls are asking to be viewed just as they are, while it may be the media’s psychology that they keep on looking for something sensational to say about them.”