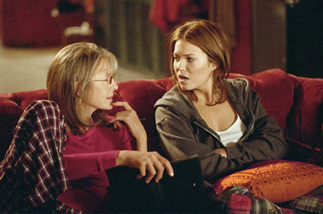 Milly (Mandy Moore) and mom (Diane Keaton) dip their fingers in the wedding cake in “Because I Said So.”

Hollywood's wish-fulfillment domestic fantasies cause a unique problem for Americans living in Korea ― they leave us to explain to the locals that no, this kind of thing doesn’t really happen. (I imagine there may be an opposite, more disappointing problem experienced by worldwide “Friends” fanatics who move to the United States expecting to find a liberal romantic paradise where all emotional problems are solved in slightly less than half an hour.)
By way of example, take “Because I Said So.” Now, it's going to be obvious to any Korean that the film’s slapstick and over-the-top humor is meant for laughs. But a residual hint of seriousness leaves that lingering doubt that produces questions to the resident foreigner like, “Do Americans think it’s O.K. to interrupt work to make out?” or “So American mothers really talk to their daughters about orgasms?”
Thus, let me take this space to reassure the Koreans who read this paper for English practice (or simply carry it around to look smart ― which is a perfectly good reason) that “Sex and the City” is just a TV show and “Because I Said So” is just a movie.
Perhaps a miniscule fraction of people have relationships like these. But the average American girl is not normally left to choose between the rich architect with big plans and a huge house and the judge’s son who teaches guitar and has a kid of his own ― both of whom her mother snagged for her through online dating without telling her and both of whom she’s having sex with ― while the mother secretly rolls around her daughter’s apartment with the judge.
At least, if this kind of thing ever does happen, rather than a double wedding its more likely to end with two lifetimes of therapy.
This is a fantasy. But with this kind of fantasy, the idea is to put in just enough truth to keep the characters human and the audience involved. “Because I Said So” knows this, but (as the plot summary might suggest) its wacky hijinks more than overwhelm its nuggets of truth.
Diane Keaton is almost too perfect as Daphne, the meddling mom, and her chemistry with her daughters, played by Mandy Moore, Lauren Graham and Piper Perabo, strikes exactly the chord of “I’m just looking out for you” versus “Mom, I love you, but you make me crazy.” By the end of the film one starts to feel that it’s fortunate that Keaton, in real life, has no daughters.
But just as Daphne smothers her daughters, an overly manic, cliched script full of paper-thin characters and groaner gags (I thought we were done with ventriloquist “woody” jokes in 1935) smothers this movie. The male love interests, played by Gabriel Macht, Tom Everett Scott and Stephen Collins, are almost stunningly unoriginal. Every plot turn in the film is completely obvious 20 minutes before it occurs. And people being hit with cakes (I counted three, though there may have been more) is just not that funny.
It’s all rather a shame, because Moore is quite cute, sympathetic and pretty ― but not in an unattainable way ― in her role and a romantic film built around her could conceivably work quite well. We just haven’t seen that movie yet.

Because I Said So
Romantic comedy / English
102 min.
Now playing