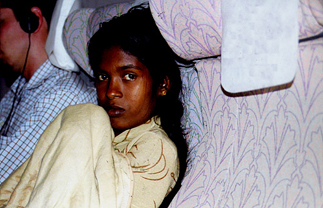 Still from Doma Al-Joundi’s “Maid for Sale.” Provided by the organizer

One woman chooses to become an illegal immigrant to pay for her son’s hospital fees. Another is pushed into forced labor after her passport is stolen in a foreign country. Still another is virtually sold into matrimony to a man from another country whom she does not know.
The stories are sad. But what makes them more tragic is that they are true, and happening at this very moment around the world.
The Women’s Film Festival in Seoul chose migrant women as its major focus this year. Among the series of documentaries, there are nine made by migrant women themselves, in which they talk about their lives in rural Korea after leaving their homes to marry Koreans.
Over 17 days, women from Vietnam, the Philippines and China documented how they adjusted to Korean life. They are planning to be present on the days of the screenings and meet the audience for a special “Master Class” session the festival will include.
As for films from professional directors, Joo Hyun-sook tells the story of a 19-year-old Vietnamese girl in Korea who married a 62-year-old Korean farmer. The 62- minute documentary is called “She Is.”
Doma Al-Joundi, a director from Lebanon, talks about the many Sri Lankan women who work in her home country, many of whom are the victims of violence and fraud. In “Maid for Sale” she describes the lives of three Sri Lankan maids.
American director Meena Nanji describes women with professional jobs in Afghanistan. Although they are a doctor, a teacher and a human rights activist, they become vulnerable when war erupts.
Kylie Grey, an Australian director, talks about how wars in the Middle East have affected the women there. Her film “My Home ― Your War” was made while Grey was living in Baghdad for three years
Along with the movie screenings, the festival continues at Ewha Womans University with an international forum next Tuesday to discuss the issues surrounding migration for Asian women.
But for audiences who may feel these issues are a bit overwhelming, there are films dealing with female sexuality in a lighter brighter way.
For the first time the festival has created a category called “Queer Rainbow” to deal with lesbianism and female transgender issues.
“Out: Smashing Homophobia Project” by a group of Korean directors, described Korean teens who are confused over their sexual identity. In “Itty Bitty Titty Committee,” Jamie Babbit describes the lives of American lesbian teens, while Jan Dunn’s “Gypo” describes a British woman who after 25 years of marriage to a poor alcoholic husband, finds happiness in the arms of a Czeco woman.

All films from the 9th Women’s Film Festival in Seoul are screening at the Artreon Theater near exit 4 of Sinchon station on subway line No. 2. The festival runs from April 5 to 12. For screening schedules and ticket prices, visit www.wffis.or.kr.