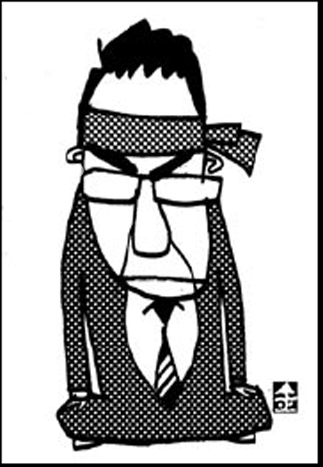 Confucianism considered fasting a noble way for scholars to fight back. Bo Yi and Shu Qi in ancient China entered Mount Shou Yang, and died while fasting because they refused to eat the crops from the Zhou State. During the dynastic era, fasting was the only way to resist a powerful king without actually going to war.
Choe Ik-hyeon raised an independent army to fight against Japanese invasion at the end of 19th century when he was 74 years old, and when he was arrested and imprisoned on Japanese Tsushima island, he said, “Do you expect me to live off the enemy’s food?” and he went on a hunger strike.
Bobby Sands, an Irish Republican Army member, died after going on a hunger strike that lasted 66 days, and Mahatma Gandhi went on 14 hunger strikes throughout his life.
During the Chun Doo-hwan administration, Kim Young-sam went on a hunger strike as a last resort.
A hunger strike is an effective weapon for showing opposition, because the person on strike puts everything he or she has on the line. Recently, however, hunger strikes have become nothing more than a political show to express one’s ideas.
Pretending to risk their life is insidious enough -- but actually sacrificing oneself is more incorrigible, considering that other means are possible.
In a democratized society, normal routes of communication need to be in place. If such lines of communication existed, people would not need to go to such extremes to have their voice heard.
Some lawmakers have entered into hunger strikes as a means to express their opposition to the free trade agreement between Korea and the United States. Lawmakers that had formed the crux of the ruling party and the government seek the nomination for the presidency.
They have plenty of ways to express their ideas and opinions; lawmakers have the power to veto or pass the free trade agreement. They claim to work for improving the standard of living for the people ― was going on a hunger strike the best idea they had? It only encourages the people, who are truly powerless, to use extreme methods.
Kafka’s short story, “A Hunger Artist,” is about a man who makes a living by displaying his hunger to other people. At about the time the audience’s interest starts to wane, the hunger artist has forgotten the taste of food and dies. Lawmakers consider life a gimmick and their hunger strikes have turned a blind eye to the truth.