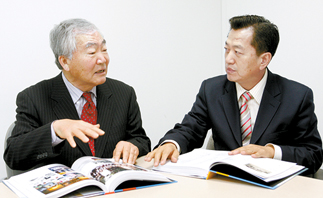 Pastor Lee Seon-ju and Kim Myung-gyun, publisher of the Christian Herald USA, recently released a six-volume collection called “A Centennial History of Korean Immigrants to North America.”
They began their chronicle of Korean immigration to the continent in 1998. They have spent nearly 10 years putting the book together. It tells the story of the 2.3 million Koreans who migrated to North America in the twentieth century.
Mr. Kim operates the Christian Herald, a Korean-language newspaper based in Los Angeles.
He recently visited Korea for the book’s publication. “We didn’t know the book would be such hard work,” he said. The book examines the lives of Korean immigrants and the role played by the church in North America, Mexico and Cuba. It contains three volumes of photographs.
Under the title “The Rainbow that Crossed the Pacific” the photography books portrays the religious practices of Korean Protestants, Catholics and Buddhists in North America.
The book contains 3,500 photographs that were selected from a massive archive of 20,000, all of which were submiited by Korean migrants.
The historical text includes a chapter called “The Centennial History of Koreans in Mexico,” which was compiled from columns that Lee wrote for the Christian Herald between 1999 through 2003.
The Christian Herald launched in 1977. The company operates a print newspaper, radio broadcasting and Internet TV.