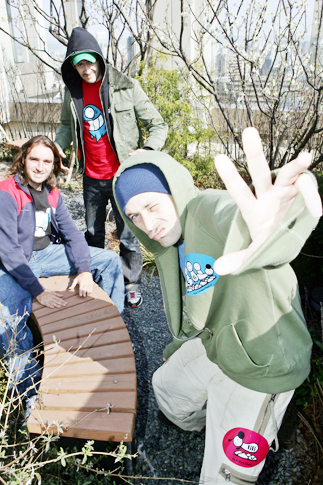 From left to right: Pez, Flying Fortress, and The London Police, Friday in the rooftop garden of the Somerset Palace in Seoul. By Ahn Yoon-soo

As the roots of hip-hop culture reach ever deeper into Korean soil, the evidence of its presence increasingly sprouts on Seoul streets. Young men dressed as their favorite American hip-hop stars rap battle in Hongdae squares, D.J. flyers coat the Apgujeong sidewalks, B-boy dance shows are ubiquitous in Daehangno theaters and graffiti splashes across the walls, and buildings of Sinchon and Itaewon.
The rising tide has inundated the mainstream, and on this flood, the K-Spray graffiti tour washed into Seoul last weekend.
Sponsored by the K-Swiss sports shoe company (clear evidence that hip-hop has distanced itself from its alternative roots), K-Spray sponsors graffiti artists from around the world, teams them up with big-name D.J.’s, and tours them around urban centers in an attempt to align the brand with the massive marketing potential of the new hip-hop.
Seoul was the fourth city on the Asian tour, which had already hit Singapore, Shanghai and Hong Kong, and will continue on to Taipei and Tokyo.
The artists were Flying Fortress, or Mathias a k a “Mullet,” from Munich; The London Police, or Chaz, from London and Amsterdam; and Pez, or Jose Jesus Sete, from Barcelona.
They performed along with Philadelphia’s D.J. Tat Money at Catchlight in Hongdae on Saturday night for an enthusiastic crowd.
Each has his own distinct graffiti character, stylized to work perfectly on T-shirts, stickers, posters or any other product that can be made on the cheap and sold quickly.
K-Swiss has capitalized on this marketability, and the tour is backed by a sleek logo incorporating the three characters, a plethora of swag from blow-up chairs to hoodies, and a slick Web site.
On the K-Spray logo, Flying Fortress’ teddy bear soldier, the London Police’s phallic-shaped “lad,” and Pez’s grinning fish protrude from the signature buildings of each of the cities on the tour.
The JoongAng Daily met with the three in the garden that sits far above the grimy city streets, on the rooftop of the chic Somerset Palace Hotel in Gwanghwamun.
What the group does “is not really graffiti,” said Chaz, or London Police. “We’re more artists?. We do it slightly differently, not like traditional tagging, which is all about battles. We draw next to each other,” he said.
He was referring to the “tagging” tradition that graffiti grew from, where people “throw up,” or paint their trademark name, on the most difficult-to-get-to spots, and competing artists spray their own name over it in a gesture of territorial dominance.
“We’re just trying to travel and make friends,” Chaz said. “We’re basic white, middle-class geezers.”
Jose, or Pez, agrees that the trio’s art is geared for a wider audience. “I like to reach everyone, from kids to old women,” he said. “But sometimes I tag.”
When asked about the differences between Asia and their European stomping grounds, Jose said, “I think they control more here. On the street people have a different character.”
“In Singapore they’ll chop your hands off for [doing graffiti],” quipped Mathias, or Flying Fortress.
He went on to describe how graffiti is just catching on in Asia, similar to how it “started in Europe after looking at New York. It’s at the beginning here.”
“It’s like a kid growing up,” said Chaz. “Until I was 14, I didn’t realize I could think for myself.”
“I’d like to see people use Korean or Chinese letters,” said Mathias.
“They should come up with something very Korean” that represents the country, said Chaz. “They need to think about Korean animals” and culture and make something from that, he said.
“And then bring it together in their own style. When we see that, I think the world will recognize it,” said Mathias.
“It’s good to see people change it,” said Chaz.
Graffiti should “take something from the East too,” he added.
When asked if they had any advice for young Koreans interested in graffiti, Jose said, “Don’t lose your identity.”
“Be positive?. Try to do something new,” said Chaz.
“And don’t copy my character,” added Mathias, with a smile.