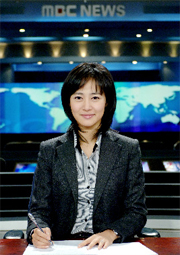 Kim Ju-ha, who recently debuted as a solo news anchor on a major network. [MBC-TV]

It sometimes feels rather awkward to be young and female in Korean journalistic society, which in my experience is still male-oriented. On a recent weekday, I struggled to maintain my self-esteem in a group of fellow reporters who were overwhelmingly male and middle-aged. A resigning high-level official was visiting the press corps to bid farewell. At the conclusion of the ceremony comes the group photograph ― an event very likely to infringe on my basic human rights.
According to silent custom, younger women sit in the front row next to the official. Perhaps I am overreacting, but I’ve experienced this particular practice several times, and each time I was denied the right to stand in the place of my choice. Maybe I am a strange creature, but I am repulsed by the idea of being taken to the front row against my will.
Finally the time for the group photograph came, and I intentionally joined the group late, to avoid the obligation. But to no avail. Some senior reporter in his late 40s discovered me in the back row, took my arm and sent me to the front. To be frank, it was far from pleasant being snatched in such a way. No wonder I have a weird smile in the photograph.
On the same day, I underwent questioning about my choice of shoes. “Why do you wear high heels?” a senior reporter inquired, adding, “It’s so intimidating for shorter men.”
I’m sorry, but it’s not my fault that all the shoe designs I adore come with heels, which are not even deadly high.
These kinds of situations give me all the more respect for Kim Ju-ha at the Munhwa Broadcasting Corporation, one of the three mainstream national TV networks.
Now married with a child, Kim, in her 30s, has become a solo news anchor after years of serving as an announcer. Although many female announcers don’t go beyond parroting scripts and pursuing a rich Prince Charming, earlier in her career, Kim volunteered to leave announcing to become a reporter.
Korea’s news anchorwomen usually play decorative roles in delivering the news, sitting next to middle-aged (or even older) anchormen. Kim defied this stereotype by pursuing a career as a reporter, and in early March, she was promoted to solo anchor for a weekend primetime headline news show at 9 p.m. That show, “News Desk at 9 p.m.,” is a signature program of the network.
Believe it or not, this is the first time that a major Korean news show has featured a woman as solo anchor. Of course, Kim’s appearance is very presentable, but I think highly of the fact that her looks are not her only asset.
So I made time to watch her debut on March 12. I was glad to hear her low-toned, signature voice, which is far from the flattering or fawning voices adopted by too many young women in this world.
As the show came to a close, there was a look of regret on her face, and it was obvious that she was thinking she could have done better. I thought she did a decent job, but there was room for improvement.
Kim concluded her debut by saying, “I hope the news I deliver will be good.” The thing is, she’s got to be tougher to deliver any kind of news.
One thing that I noticed is that she is doing the weekend news, which tends to be softer. My suspicions only grew when she was not the anchor on Sunday, April 1, when the dominant news was about the free trade deal negotiations between Seoul and Washington. I turned on “News Desk at 9 p.m.,” and saw a traditional middle-aged male anchor and a young, flowery anchorwoman.
It was a “special night,” I was told, so Kim did not appear. It appears to still be formidable for a woman to fly solo in male-oriented journalism. I’ll keep sending my best wishes to Kim as she travels her long and winding road. And in the meantime, I’ll fight for my right to stand where I want to in group photographs.