An artist’s nirvana in a suburban townhouse

An artist’s nirvana in a suburban townhouse 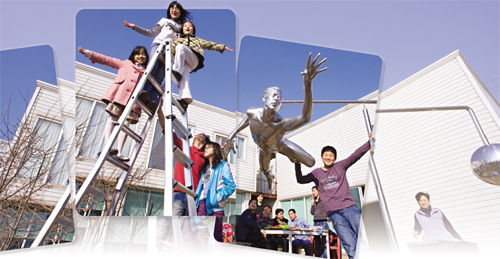 As people grow older they want larger and nicer houses with high ceilings, sunlight streaming through the windows and a round table big enough for the whole family to dine together.
It would be ideal to reside in such a house and have friends live nearby. For retirees, such a place could provide the perfect environment.
This may explain the growing interest in townhouse communities. However, it is not easy to turn such dreams into reality, for economic reasons, and because it is difficult to find people who have similar interests.
On a peaceful Sunday afternoon, Lee Won-seok, 40, a sculptor, and Chun Young-shin, 38, a potter, held a barbeque party in their front yard. Those invited were all neighborhood artists.
Five couples attended the party, all 10 of them painters, sculptors, designers or musicians. They all have their studios in the area and organize an event called “Gusan Open Studio” in the fall, in which they open their studios to the public. Hong Ji-yeun, 35, a painter at Gana Art Center, is the only one who has a studio outside the area.
“We gather regularly. Especially when spring comes, it is almost a ritual for us to visit each other’s homes and have a couple of drinks,” says Park Seung-beom, 63, a painter.
“We planted papaya trees, pine trees, white birches, peonies and lilies together just a few days ago,” says Lee. “I can finally fulfill my promise to my wife. I promised to provide an environment where she will be surrounded by flowers all year round.”
“That was how he talked me into moving here,” Chun said. “However, it has always been my dream to have a spacious studio in the suburbs.”
Prior to moving to Gusan-dong, Lee ran an art academy. In 2002, out of the blue, he told his wife that he would be closing the academy. He started to look for land. He had decided he needed space for a studio with peaceful surroundings.
“That is how I met Won-seok,” said Kwon Suk-man, 42, a sculptor. “I was doing exactly the same thing, looking for proper land for a studio. About a year into my search, I heard that there was land available in this area, and we came together to look around. Our friend Suh Song was already living here.”
Kwon, Suh, and Lee are all alumni from Hongik University, and they decided to move to Gusan-dong together. It suited their purpose perfectly. It has the peacefulness of suburbia yet is not far from the city. Jang Sun-young, Suh’s wife, is pleased to have neighbors. “I was glad when other people decided to move here,” she said. “Until then, our house was the only one in the area, and it felt kind of lonely.”
It cost approximately 700,000 won ($680) per 3.3 square meters to purchase the land for their houses. Both couples decided to minimize the cost by building prefabricated homes. Yet the cost was still high.
“We sold our house in Ilsan and cancelled our installment savings plan,” said Chun, revealing that she and her husband only had 40 million won to spend. “And that barely covered the building costs.” Cha, Kwon’s wife, said, “Once we paid the deposit, we barely had anything left. We had a sponsor and some friends who helped us purchase the land.”
In order to cut down on the costs of construction, they had to reduce their labor bill. Kwon and Lee volunteered to do the manual labor required.
However, the building work took much longer than expected. The contractors they had hired gave up, and it fell to Kwon and Lee to finish construction.
By September, the Lee family moved in to the house, but, at that stage, it did not even have proper doors.

“It was a difficult time, but our children enjoyed it,” said Chun. “And I was excited at the thought of building my own house with my husband.”
In the end, by using their own labor, the two families were able to cut their construction costs from 150 million won to 80 million won each. They also built spacious studios.
Fellow alumni in the area were especially helpful during the construction period.
Choi Seung-ho, 51, a sculptor, placated neighbors when they were irritated by all the construction noise. Suh was in charge of providing utilities such as water and electricity. When Ko Kang-chul, 40, a graphic designer, and his wife Hong Ji-yeun, 35, a painter, moved to the neighborhood in 2004, the families decided to form the Gusan Art Community.
“It is wonderful to have neighbors who share the same interests,” said Cha. “In the past, I never really had the chance to bond with my neighbors. Now, I truly feel I can share my feelings and thoughts with my neighbors.”
“Before, I had to stop everything and run to the shop when I was missing a tool,” said Kwon. “Now, I can just run next door and borrow it from a friend. And when I have to move heavy sculptures I can just call professionally trained workers in the neighborhood. What more could I ask for?”
“Above all, I am glad I can fully concentrate on my work,” said Lee. “Even late at night, when I see lights coming out from neighboring studios, I feel the urge to work more. It is like an extra stimulus.”
Mr. Choi said that talking about art and going to the local pubs with his friends are his life’s joys. “Over the years, I have been able to learn about art and the artists behind it,” he said. “It has been a great experience.”
“Being able to communicate with people who share the same passion and views has been rewarding,” said Ko. “Since we all started living in the same neighborhood, we have all grown artistically as well.”
This spring Kwon is holding a one-man exhibition called “Kwon Suk-man: Echo of a Silent Energy,” at the Asian Publication, Culture and Information Center. It runs until April 7.
Mr. Ko will also hold his third one-man exhibition, in Beijing, between April 12 and May 9.
Although the neighbors have become like family to each other, they remain courteous. They always make a phone call before paying a visit, and try not to ask for troublesome favors. “Keeping a certain distance and accepting each individual as they are has strengthened our friendships,” explained Choi.
Life seems perfect in Gusan, but what do they do about the children’s education?
The parents have to drive the children to school everyday, and tutors are not available in the area, but the children seem content.
“When we lived in the city, we were always worried about rent and had to move around often,” said Chang. “Now the children can have more stability and can enjoy nature. This actually seems to be a better environment for the children; they seem to learn more.”
In fact, the children, ranging in age from a second grader to a junior in high school, have improved their grades since moving to Gusan-dong.
Living in a close, friendly neighborhood seems to have had a positive influence on the children. The children have all become like brothers and sisters, and the adults treat each child like their own.
“Although we may not earn much money, we are content with what we have,” said Chun. “It is more rewarding to finish new pieces than to have lots of money to save.”
Chun looked outside at the green vista beyond her windows.
“Four years ago we built our house, three years ago we put in our lawn, two years ago we put up fences, and last year we decorated our garden. This year we are thinking of making a pond,” she adds with a smile. “That is the story of the families in suburbia.”

In 2001, painters and sculptors in Gusan-dong, Ilsan, organized an event to show their studios to the public for free. Since then the artists have hosted the event every year. It lasts for 15 days, starting two weeks after the Chuseok holiday. Last year, 14 studios opened their doors during the event. The visitors were able to enjoy different pieces of art and have the chance to learn what goes on in the studios. They were also able to create their own artwork. Since 2004, the “Gusan Open Studio” has gained recognition as an important cultural event in the community, and is now sponsored by Gyeonggi Cultural Foundation.
Far Left: Kwon Seok-man with pieces made in Gusan-dong.
From top, left: Gusan artists working with young visitors; Park Seung-bom’s studio; Lee Won-seok’s workshop; Cheon Young-shin’s pottery.


Not all communities are as successful as the Gusan artists group. In 2005 and 2006, there were many stories in the media about a community village in Gangwon province.
However, that project has almost fallen apart. One of the community members, who does not want to be named said, “I realized what a difficult goal it is, to build a community. I joined the project envisioning a peaceful life, but the conflicts between members and the economic burden that resulted from the crumbling of the project have been terrible.”
During the process, the friendship between the members fell apart as well. There are steps that can be taken to take to avoid such failures. Cho Woo-hyung, the CEO of “The Museum,” a real estate consulting firm, offers the following advice.

1.Members should share a common hobby: Members should also have similar goals and expectations.
2.Clearly state the purpose: Members should be clear on whether the houses will be permanent or vacation homes. Furthermore, the members should agree on how to spend their time together.
3.Select a management method: Decide on whether there should be a separate caretaker, or just a community system to take care of management problems.
4.Budget for the project and purchase affordable land: Make sure local officials are consulted before the land is purchased. Relying solely on real estate agents can cause serious problems.
5.Choose the project manager: After discussing the details of the project, choose a project manager that best suits the purpose. Find construction workers through the project manager or do research beforehand. The project should be carried out through a contract with professional construction workers.
6.Agree upon a method for conflict resolution: Be sure to set channels for conflict resolution before initiating the project.
7.Dealing with sewage is an important issue: Installing electricity is relatively easy. The sewerage system is always the problem.
8.Recommended areas: Yangpyung, Yangsury, Paju, and Yongin.