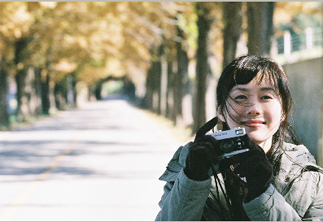 One of the poignant moments in “Traces of Love” is a splendid scene ablaze with autumn-tinted mountains in which Se-jin (played by Eom Ji-won) walks out of a tunnel after suffering a severe panic attack brought on by her memory of being trapped inside a collapsed building.
The scene vividly captures what director Kim Dae-seung may have been trying to achieve through his film ― the transcendent strength of nature to heal wounded souls.
His attempt might come across as passive or overly-cautious for people who still expect a critical diagnosis of history, but 13 years after the Sampoong Department Store collapse in Korea (the victims of which were never truly compensated), his option seems just, if not inevitable.
The film “Traces of Love” is based on this peacetime disaster, which took place in 1995, leaving 501 people dead. Woven into the story is a bribery scandal involving the building’s owner.
The film takes the tone of a melodrama, recreating the incident from the point of view of one of the victims, Min-ju (Kim Ji-soo), who died while visiting the department store to buy furniture for her new home with Hyeon-woo (Yu Ji-tae) before their wedding.
The film is gentle throughout, deliberately focusing on the painful aftermath for the survivors, the victims and their families, instead of the actual catastrophe itself.
Even when it comes to the computer generated details of the collapse, Kim stops at showing a few cracks in the ceiling and dropping concrete columns. The scene reminds viewers of the reality of the event, but it doesn’t make a spectacle of it.
Instead the film quickly changes gears, focusing on Hyeon-woo’s travelogue. He takes a long journey, visiting the country’s rivers, temples and mountains in the fall, places his girlfriend marked in her notebook for them to visit on their honeymoon. Min-ju had visited them in the past in her work as a television producer.
The film draws out people’s emotions by consistently overlapping alluring landscapes and the feelings of pain and loss seen on characters’ faces.
The film succeeds in soothing our minds, yet it also poses a sense of guilt. Viewers find themselves remembering the pain, which hit us so hard at the time of the disaster, without critical reflection.
But that seems to be the path the film chooses to take.
Despite the fact that Hyeon-woo is a prosecutor in charge of bringing those responsible for the building’s collapse to justice, the film blames no one for the incident, focusing more instead on the pain by featuring beautiful scenery and the music of Mozart and Handel.
Perhaps the film’s Korean title “Gaeulo,” which means “To Autumn,” faithfully reflects Kim’s sympathetic view toward the victims and the incident (the collapse took place in the summer).
It proposes the idea that in the end, the only remedy for any pain is to move on.