Until recently, I had never purchased a game console ― I simply saw no reason a scaled-down computer plugged into a TV with fewer buttons could possibly be more fun than my PC. I mention this because it made me exactly the customer Nintendo is aiming for with its latest generation of consoles ― the DS, with its unique touch screen, and the Wii.
Well, the DS hooked me and the Wii reeled me in.
The Wii has two twists that set it apart from other consoles ― its motion-sensitive, two-handed controllers, which react to pointing at the screen and to different hand motions, and its price, $350 less than a fully-loaded PlayStation 3.
Nintendo’s has bundled Wii Sports with every Wii sold in the United States ― and it’s clear why. Swinging the controller like a racket in tennis, holding it like a bowling ball, throwing punches in boxing and swinging in baseball is an entirely new gaming experience. The graphics aren’t hyper-realistic, but that’s not the Wii’s goal ― it’s for gamers tired of the pixel race and looking for something new and fun. Wii Sports delivers. By Ben Applegate 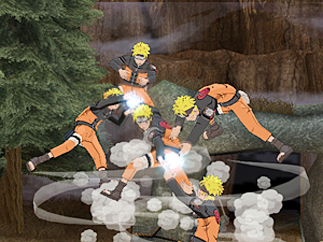 I may be a new console owner, but I did have a great time with Tomy’s previous Naruto fighting games on a friend’s Gamecube.
These pit ninjas, each with different sets of “chakra”-powered special attacks, against each other in a 3-D arena. The first offering for the Wii is also the first based on the redesigned “Shippuden.”
The basic action is the same ― two to four ninjas face off, equipped with weak attacks (activated by shaking the Wiimote), strong attacks, combos and special attacks. The latter is where Shippuden takes advantage of the Wii controller, requiring a series of hand movements with the Wiimote and Nunchuk to successfully pull off a super-move.
It’s much easier to follow motions than the arbitrary button-mashing of the Gamecube games, and it’s ultimately more satisfying to swing your arms around and see the characters do the same.
Unfortunately the game ships with a stunted story mode (especially compared to a similar PS2 offering) and some severe lag problems when using one character, but this is still a fun, competitive game for Naruto fans. By Ben Applegate